Kylie seems to calm down as David further reassures her there's nothing going on with Tina. But secretly she tells Eva she's not going to be confrontational any more but instead search for evidence. Before we know it, Kylie is storming over to The Rovers…

Elsewhere, it's Steve and Michelle's first day running the pub. Michelle knows it will be hard graft. But Steve is anxious that she still doesn't know about Liz's involvement in the business.

Also, Roy's decided on the trip to Blackpool but first he needs to enlist the help of a friend to improve his ballroom dancing.

Tina and Kylie take their row outside. As David sees and rushes over, Kylie demands answers. At home later, Kylie gathers some things to take to Eva's for the night. when she grabs a DVD, she notices a piece of paper sticking out - the DNA results. Kylie's shocked, believing Gail is behind it. Worried about what David knows, she goes to see Nick.

Elsewhere, Michelle is fuming as Liz makes herself at home in The Rovers. Steve desperately tells Michelle he could only gather enough money if Liz came in on the business too. 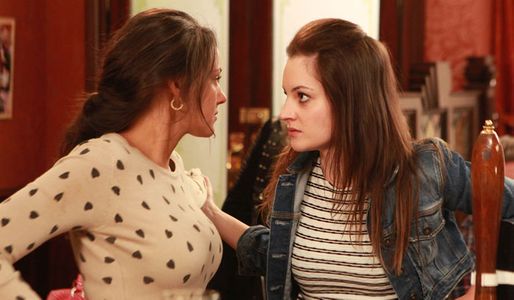