Tyrone advises David not to waste his money on the car but David refuses and Nick clocks their exchange. Meanwhile, a deeply concerned Gail collects Max from school after receiving a call that he has wet himself. This is the last straw for Gail and, furious, she confronts David, imploring he needs to pull himself together and focus on his kids. David confides in Nick that without Kylie, he feels a failure as a parent. Could this latest episode push him dangerously over the edge?

Michelle begs Steve to get himself tested but Steve remains unconvinced. In the cab office, Steve confides in Tim that he might have MD. Elsewhere, Leanne will stop at nothing to get the results she needs from Steve. Determined, she comes up with a new plan to get what she wants...

In the garage, Kevin lays the law down to Sophie telling her there’s no way he can spare her for 3 months. How will Sophie take her dad’s rules?

Simon’s excited when Peter calls and confirms he’ll be there to watch him pick up his Player of the Year Award. Pointing out she’s short staffed at the shop, Tracy enlists the help of a reluctant Ken. But when Ken takes an unsettling call he’s shocked at Tracy’s reaction. Meanwhile, Seb arrives for dinner with Faye and her family and proves an instant hit with Anna and Tim. But when he presents Faye with an expensive gift, she realises that all may not be what it seems with Seb...

David tells Gail he’s going to take the kids for a spin. After David leaves, Gail opens her son’s laptop and finds his farewell video. Her blood runs cold as she watches it in horror. After quizzing Tyrone, Gail is chilled by his words and with the help of Nick and Sarah, David’s revenge plot dawns on them... but is it too late?

Steve returns home and tells Michelle that he’s going to have the test - will he stick to his word? Elsewhere, Sophie attempts to reassure Kevin she just wants to spend some time with her sister. Kevin relents, will this be enough to change his mind?

Over dinner, Anna’s pleased to see Seb getting on with the family so well. As Faye sees Seb onto his bus, she tentatively asks about her expensive gift but will she get the answer she wants? Simon returns to No.1 clutching his trophy, upset that Peter failed to turn up. Ken confides in Simon how he always wanted to do the Grand Tour of Europe’s cultural gems but when Tracy announces she needs him to cover in the shop again, Ken is torn between his dream and his demanding family.​ 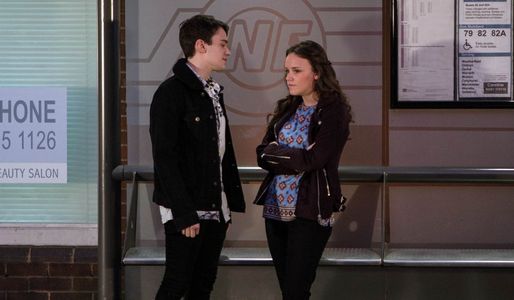