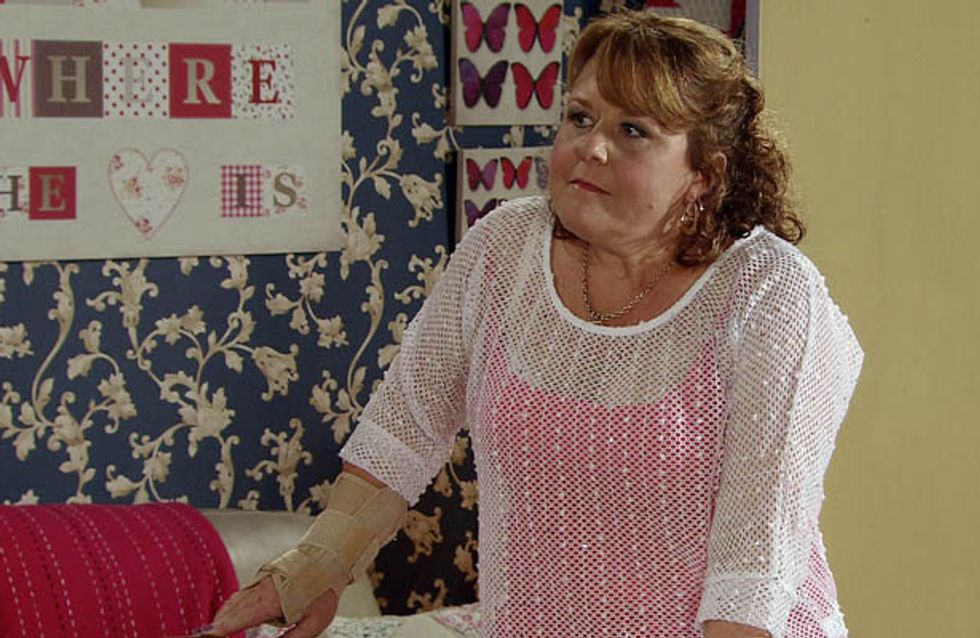 After agreeing to rent the bookies flat to Owen, Peter calls in the pub and tells Steve and Michelle he’s leaving. Michelle’s glad to see the back of him whilst Steve wishes Peter well. After arranging for any rent to be paid to Leanne for Simon’s maintenance, Peter breaks the news to Simon that he’s moving to Portsmouth. Simon’s clearly upset and when he launches himself at Peter, begging him not to leave, will Peter be persuaded to change his mind?

Alya finds Gary alone in the builder’s yard. They kiss passionately until they realise to their horror, Leanne’s watching and quickly break apart.

As Tim arranges another reading lesson with Anna, Sally notices their hushed conversation and is immediately suspicious.

Kal confronts Tony about Zeedan’s paltry wages. Zeedan’s fuming and orders Kal to stay out of it. Cilla admits to Fiz and Tyrone what a dreadful mother she’s been and reckons it’ll be best for everyone if she moves back to Wolverhampton. Fiz insists that she’s going with her to help while she recuperates. Worried they’re not spending enough time together, Michelle rearranges the rotas so that she and Steve have to work together. Will her plan pay off?

Simon’s upset, blaming himself for not believing in his own Dad’s innocence and causing him to want to leave. Peter assures Simon it’s not his fault. Carla finds Peter and a tearful Simon on Maxine’s bench. Carla joins them and promises Simon she’ll arrange for him to visit his Dad in Portsmouth whenever he wants to. Will Simon let his dad go?

Leanne confronts Gary and Alya, demanding to know what’s going on. Alya admits they’re seeing each other but she doesn’t want Kal to find out. Will Leanne be willing to lie to Kal and keep their secret? Meanwhile knowing how small the bookies flat is, Izzy offers Gary her sofa. Owen and Anna secretly hope they might be getting back together.

Tim struggles on with another reading lesson but when Sally discovers Anna missing from the café and Tim turns up 40 minutes late for his lunch looking sheepish, Sally puts two and two together and comes up with five, convinced Tim is having an affair with Anna.

Michelle’s looking forward to spending some time working with Steve. However Steve sneaks off to the bistro, returning drunk and late for his shift. As he heads for a lie down Michelle’s at her wit’s end. As Cilla and Fiz leave for Wolverhampton, will Chesney finally forgive his mum?