Stressed Aidan is worried someone might find the scissors as the bins have not been emptied but Eva reckons he’s panicking unnecessarily. Later, Aidan receives a message purporting to be from Maria but when she denies sending the message, she and Aidan realise it’s actually from Caz - she must have overheard them talking the previous evening. But that is the least of Maria’s worries when Johnny and Jenny begin to root through the factory bin looking for something… will they blow Maria’s secret wide open?

Gary admits to Sarah he’s falling in love with her. Later, when Sarah tells Bethany how much it means to have her approval and Gary thanks Bethany for setting them up, Bethany fights back the tears. Sarah later admits to Gary that she loves him too and finally reveals to him how David was on his way to kill Clayton when he crashed the car injuring Anna but what will Gary’s reaction be?

Michael apologises to Phelan and suggests they bury the hatchet. Phelan reluctantly shakes his hand. Later, Michael lets himself into No.11 to retrieve his electric blanket cable and, unbeknown to Phelan, overhears him on the phone to Vinny. Hellbent on proving Phelan is trying to fleece Eileen, will Michael get the evidence he so desperately needs?

After a night of great sex, Luke heads off and Tracy watches him go admiringly. Tracy then quizzes Peter about where he spent the night but Peter’s evasive. At Tracy’s request, Rana visits Ken and explains how much Tracy would like to see him. Will Ken be swayed? As Rana leaves she’s surprised when the nurse reveals that Ken has had a regular visitor for the last two weeks - who could it be? Craig allows Faye to entertain Seb at No.5. But when Craig makes an uneasy discovery about Seb, he fears that Faye may be in over her head...

Eva, Kirk and Jenny look on as Johnny hands over the bloodied scissors to the police. Terrified, Aidan explains to a shocked Johnny that he’s now an accessory to murder as he hid the scissors in the bin. The police arrest Maria on suspicion of murder as Aidan and Kirk watch, horrified. Aidan worries as it looks like the walls are closing in on Maria, how is she going to get out of this one?

Michael tells Anna about Phelan’s phone call and how he’s planning to do a runner to Mexico but Anna’s adamant she doesn’t want to get involved. Michael confronts Phelan alone, telling him he won’t stand by and watch him make a fool out of Eileen. Rattled Phelan later shoves his Mexico ticket in his rucksack but when Eileen picks up his bag from the sofa, Phelan snaps, leaving Eileen’s suspicions piqued, is she on to something?

Gary’s furious to realise Anna is scarred for life and David is to blame. Gary storms into the salon and rails at David, telling him Anna can barely walk because of him. Sarah tries to defend David but Gary sees red and punches him, sending him flying. Who will Sarah side with?

Rana reveals that Ken’s had a regular visitor, leaving Tracy fuming as she assumes the visitor must be Peter. Tracy confronts Peter but he insists he hasn’t been near, so who has? When Craig tells Seb not to involve Faye with his knock-off gear, cocky Seb laughs in his face before cancelling his date with Faye, telling her how Craig threatened him. Could this drive a wedge through Faye and Craig’s friendship?​​​​​​​ 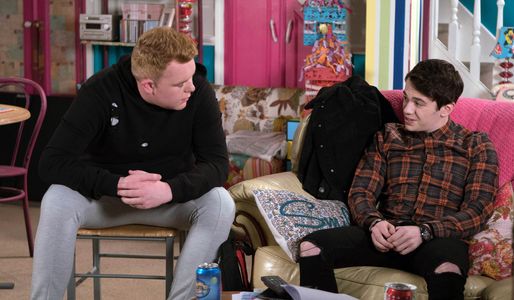