Phelan reveals to Eileen that Anna is behind the vicious letters. Eileen’s shocked and wants to call the police but making out he feels sorry for Anna, Phelan persuades her to let him deal with it. Meanwhile, Anna finally shows Kevin her scarred body as he assures her she’s still beautiful in his eyes. Later, finding Anna alone in the café, Phelan menacingly reveals that he knows she’s behind the poison pen letters and that if she gives him any more grief, he’ll call the police. Clearly shaken, what will Anna do?

Brian insists Roy should take the day off but when Anna finds the café in disarray and Brian struggling to cope, she puts on her apron and takes charge.

With no taxis available, Robert’s stressed, wondering how they’re going to deliver a huge food order. When Michelle offers to drive the bistro van, Robert kisses her fondly which doesn’t go unnoticed by Zeedan. Is he onto something?

Having witnessed a kiss between Luke and Tracy, Amy tells her mum she’s pleased that Luke is her new boyfriend. Calling at the garage Tracy begs Luke to join them for tea as Amy is convinced he’s her boyfriend, much to Kevin and Tyrone’s amusement - what will Luke’s reaction be? Norris hands Mary an official looking letter, explaining he’s been doing some research into the past she left behind. How will Mary respond to this?​​​ 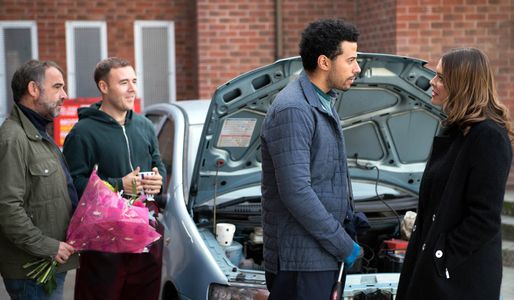