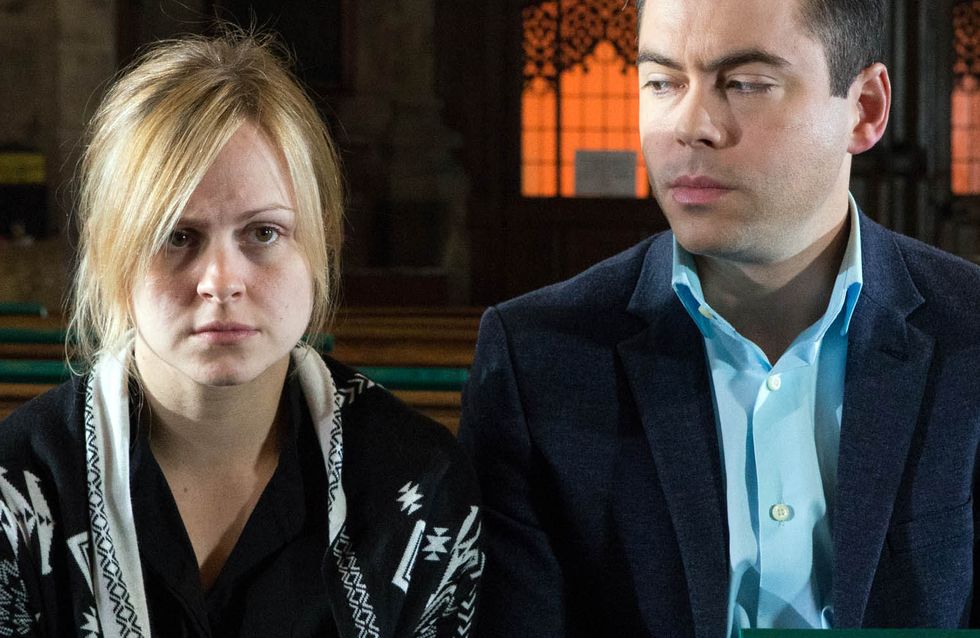 When Bethany asks Sarah to help her with her exam revision, Sarah stares into space. Bethany’s hurt. Kylie suggests to Max he might want to attend hisDad’s funeral but Max refuses. Against the family’s advice, Sarah sets off for Callum’s funeral. In a panic, David tells Todd that Sarah’s gone to the funeral, which can only be bad news. Todd agrees to fetch her back. As nervous Billy prepares for the funeral, Lee appears at the back of the church and begs Billy for money but Billy refuses. As Marion places a photo of Callum next to his coffin, the pressure becomes too much for Billy and he hurries from the pulpit. Todd finds Billy and orders him to get on with the service for Marion’s sake. Marion thanks Sarah for coming and suggests that she’d like to be involved in Harry and Max’s lives. Sarah gazes blankly at her. Lee watches from a distance.In the Rovers, Lee approaches Sarah and introduces himself.

As Phelan and Jason set off in the van, Phelan notices the yard gates are unlocked. Forming a plan, he phones a mate and instructs him to steal the conservatory glass that’s earmarked for the Nazirs. Jason and Phelan arrive back at the yard to discover the glass has gone. Phelan acts surprised whilst Jason blames himself for failing to lock up.

When Cathy opens a card from Nessa, she’s shocked to read that she’s moving to Bali until Christmas. Alex insists he’s not bothered. Egged on by his mate Jordan, Alex pulls a sickie, making out to Cathy that he’s actually really upset about his mum. Cathy gives him the afternoon off. When Alex shows Gemma a video of him racing cars with Jordan, he fails to notice Cathy peering over his shoulder. Cathy berates Alex for driving illegally and ordersJordan out.

On Sally’s orders, Tim sets about building a summerhouse in the garden and enlists the help of Craig. Sally returns home and is appalled at the wonky summerhouse. Sharif and Yasmeen watch in amusement as she drags Tim inside for a dressing down. Bethany confides in Craig that she walked out of her exam. Kylie and Max plant a tree on the Red Rec to commemorate Callum’s life.Sean finds Billy upset in the Rovers and suggests they could start again. Will Billy agree?​​​