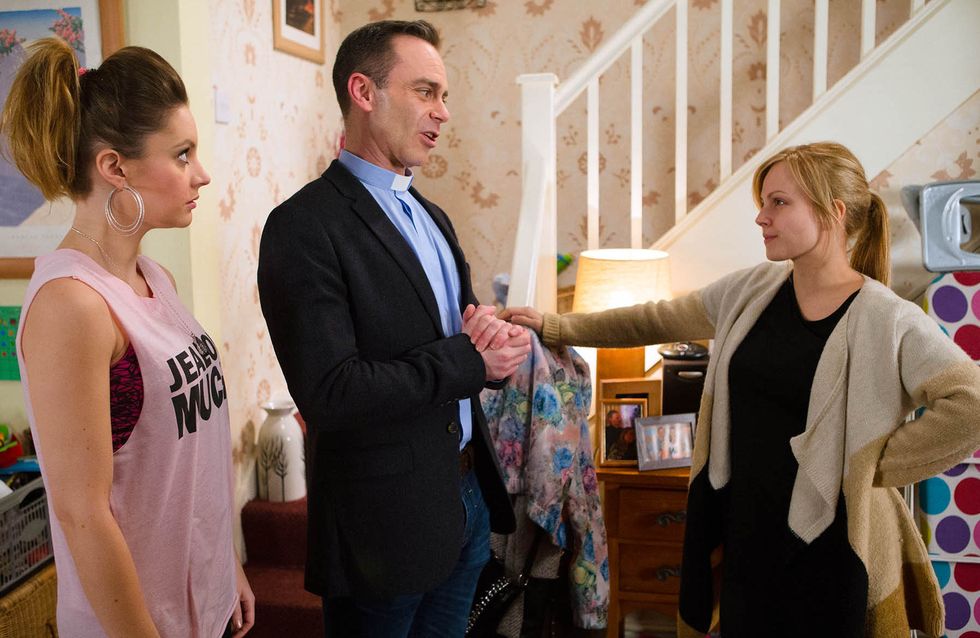 Izzy asks Gary if he’ll score her some more dope. When Dane calls at the gym for Gary, Sharif’s deeply suspicious and phones the police. As Dane leaves the gym, he bumps into Gary and hands him some cannabis just as the police arrive. Anna calls at Izzy’s flat. Suddenly Izzy panics, thinking Jake is playing with her dope tin. Anna’s furious to realise Izzy is still taking drugs whilst in charge of her son. Having found nothing on Dane, the police let him go but finding a quarter of cannabis on Gary, they arrest him. As Izzy and Anna row over her drug use, they’re stopped by a phone call from Erica informing them Gary’s been arrested. Anna turns on Izzy wanting to know if she’s going to tell the police what this is really all about.

Maria begs Luke to give her another chance, explaining how she only wanted to help Pablo and his boyfriend because she felt sorry for them. Luke’s unimpressed. In a desperate bid to win him back, Maria dons a lion costume and approaches the garage. Kevin and Tyrone watch amused as Maria declares her undying love for Luke. Will he forgive her?

Fiz reminds Tyrone that he needs to start shifting some of the junk he’s amassed. When Norris and Mary find the iron street signs missing from the walls, they accuse Tyrone of taking them to sell them on. Tyrone’s incensed. ELSEWHERE Sinead goes down with a bout of flu and tells Chesney he’ll have to fly to Portugal alone. Sarah asks Todd if he’ll be Harry’s godfather. Todd’s touched and accepts.

As Izzy heads off, a woman on a mission, Erica ushersAnna, Sharif, Dev and Zeedan into the gym. Sharif admits that he called the police on Gary and Anna puts Sharif straight, explaining the cannabis was for Izzy. When Erica confirms that Izzy uses weed for pain relief, Dev’s surprised to learn of Erica’s involvement while Sharif remains adamant he did the right thing as Gary was acting illegally. Izzy hands herself in at the police station and explains that Gary was buying the drugs for her. Gary’s released but charged with supplying drugs. When Izzy finds out she’s made matters worse and Gary is now on a drugs supply charge, she’s devastated but she refuses to give up the weed and tells Anna that if she tries to take Jake from her, she’ll be the one calling the police.

​​Norris and Mary call at No.9 and apologise to Tyrone for wrongly accusing him of stealing the street signs which they now know have been removed by the council for cleaning. Norris gives Tyrone an old fridge as a peace offering. Tyrone’s thrilled, pointing out to Fiz that he should now be able to afford his taxi licence.

Whilst babysitting for Tyrone and Fiz, Luke gets down on one knee and proposes toMaria. A flu-ridden Sinead’s misery is compounded when Chesney tells her he’ll be staying with Katy and Joseph in their apartment. Chesney leaves for Portugal and Sinead confides in Fiz that she reckons Chesney would rather be anywhere but with her at the moment.