Anna reminds a sullen Faye that Miley has a doctor’s appointment. Tim escorts them to the Medical Centre but when Faye tells Tim she’s missing a school trip to a museum, Tim relents and lets her go. Faye skips off, glad to be free of her baby. As Faye boards the coach, a group of girls make bitchy remarks but Faye does her best to take no notice, while Jackson studiously ignores her. Anna’s furious to learn from Tim that Faye pulled a fast one and left him with Miley whilst she goes go-karting with her mates. Anna meets Faye off the school coach and in front of her friends, hands over Miley, telling Faye she needs to sort her priorities out. How will she react?

Bored, Simon insists on following Zeedan to his building job. Once there Zeedan trips over Simon’s tennis ball causing the telly to fall from the wall and crush Zeedan’s foot in the process. Having surveyed the damage, Tony sacks Zeedan on the spot.

Tony plays the caring boyfriend, telling Liz how worried he is for her safety. Liz reckons the run in with
the thugs was a one off and just a hazard of running a pub. But when Erica advises her to hang on to Tony as he’s one in a million, will it get Liz thinking?

Todd’s annoyed to discover Eileen and Adrian loved up after spending the night together. He quickly sends Eileen another message from Jeff. Adrian suggests that now they’re exclusive, she should delete her profile from the dating site. But egged on by Todd, will the temptation to check her messages be too much for Eileen?

As Faye’s school mates clamour round the baby, Jackson pushes his way through the crowd and stares at Miley. Back on the street Anna’s at the end of her tether, accusing Faye of treating Miley the same way her own mother treated her. Faye’s upset but they’re interrupted when Josie calls at the flat with Jackson in tow. Josie explains how upon seeing Miley at the school, Jackson admitted that he’s her father. Faye listens, stunned, as Josie explains why she and Jackson are here.

In tears, Simon relates the incident with Tony and Zeedan’s sacking to Leanne and Kal. Fuming Leanne storms into Barlow’s Buys and demanding Zeedan’s wages, starts smashing up the stock. Will Tony be forced to bow to Leanne’s demands?

Liz admits to Tony she’d love to move back to Spain but feels she can’t because of Steve. Tony points out that part of Steve’s problem is that he still lives with his Mum at the age of 40. Continuing to sew the seeds, Tony assures Tracy he’s well on the way to persuading Liz to move to Spain and very soon the pub will be theirs.

When Eileen receives a message from Jeff telling her he’s visiting the UK and suggesting they meet for a drink, she’s clearly excited. Egged on by Todd, will Eileen agree to meet up? 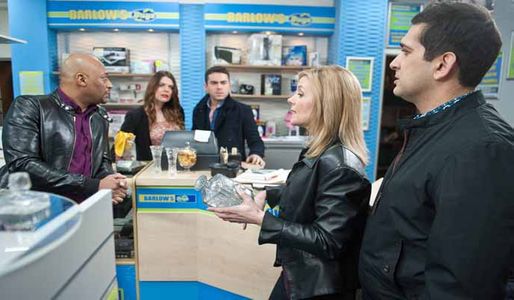