Ken rages at Tracy, pointing out how her years of appalling behaviour took their toll on Deirdre and she spent her final weeks at Bev’s because she was so ashamed of Tracy’s affair with Tony. Tracy reels. As Ken and Tracy exchange insults, each blaming the other for the grief they caused Deirdre over the years, they’re interrupted by the arrival of Peter. Apologising for missing the funeral, Peter explains his train was delayed. Tracy turns on Peter, accusing him of causing Deirdre many a sleepless night, before railing at Ken and Peter, claiming they’re equally responsible for Deirdre’s death. Will they accept this? And will Tracy accept Peter’s request that for Amy’s sake she needs to change her life around?

At Deirdre’s wake, Liz pours everyone a glass and they raise a toast in Deirdre’s memory. After years of hostility, will Audrey and Bev patch up their differences?

Liz wonders why Leanne was so hostile towards Dan at the funeral. Can Dan come up with a plausible explanation? Liz questions Eileen about her feelings towards Michael. 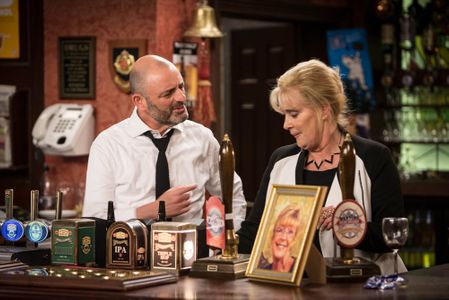