Robert tells Tracy the only business he’s interested in is the bistro and not her flower shop. Pointing out how much extra business he’s brought in, Robert tells Nick he’d like to invest in the bistro but Nick’s not keen and Robert’s annoyed. When a rival restaurateur calls in and makes it clear he’s there to poach Robert, Nick sends him away with a flea in his ear. Zeedan lets slip that a competitor called in to offer him a job, Robert’s furious to realise Nick failed to pass on the message. In front of Carla, Robert tears into Nick promising to wipe the smile from his face. As Carla listens, her heart in her mouth, is Robert about to reveal all?

Having invited Kevin round, Anna asks Tim if he and Sally will have Faye. Suspecting that Anna’s spending the evening with her new boyfriend, nosy Sally suggests they call round and pick up a DVD. In the flat, Anna and Kevin kiss passionately. As Tim heads home, he’s horrified to see Sally and Faye letting themselves into Anna’s flat.

Jason’s angry to discover Kevin’s given the arches conversion job to another builder. Having bitten the bullet and phoned Aunty Jean, Roy tells Cathy that his mother has broken her hip and he needs to go to her aid.

Leanne ushers Nick and Robert into the kitchen demanding that they sort out their differences. Robert gives Nick an ultimatum, either he lets him buy into the business or he’ll leave. Nick announces that he and Robert have struck a deal and Robert will be buying 20% of the business. Tracy’s thrilled whilst Carla quietly fumes. Tracy reveals to Robert that the rival restauranteur was actually an old friend and she merely duped Nick into thinking he was about to lose his fabulous chef. Will Robert reward Tracy’s scheming with a kiss?

Hearing Sally on the stairs, Anna quickly shuts Kevin in the bedroom. As Sally, Tim and Faye enter the flat, flustered Anna does her best to act normal. Convinced Anna’s hiding her new man, Sally calls out to him. Is she about to discover just who Anna is getting cosy with?

Determined to try and forget about Jamie, Steph paints on a smile. Luke and Andy are pleased to see her so positive. But as they head for the bistro, Jamie and his mate Wes watch them from their parked car.

Fiz announces she’s returning to work. Tyrone tries to argue but bitter Fiz points out they need the money. Tyrone’s ashamed. Cathy and Tyrone see a reluctant Roy off on his journey to Hastings. 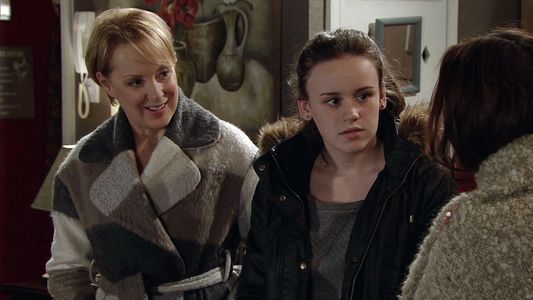