When Callum persists in phoning her, Kylie angrily tells him she’s quit drugs and wants to be left alone. Taking advantage of a lull at the salon, Kylie slips out. But when David catches her heading for the bus, she’s forced to admit that her dealer’s hassling her so she’s going to buy a new phone to cut contact. David’s dubious. Arriving back with her new phone Kylie’s desperate to convince David she’s clean but when his last client of the day is revealed Kylie’s floored!

Alya bemoans Kal’s hypocrisy in forbidding her to see Gary. Meanwhile Gary’s incredulous when Kal tells him he’s sacked from the building job at the gym. As the Nazirs clean out No.6 ahead of their move, Yasmeen worries that Kals ham-fisted manner of tackling.

Alya and Gary’s relationship will only push them closer together. When she then finds Gary and Alya
meeting in the café Yasmeen adopts a new approach, urging Alya to take things slowly, rather than
rebel against Kal. Will her words strike a chord with Alya?

Amy’s jealous when Carla gives Simon an expensive keyring for the school auction while she has to make do with Tracy’s homemade buns. Meanwhile Carla’s unnerved when an uncharacteristically pleasant Tracy insists on walking to school with her.

Eva’s not enamoured when an ebullient, glamorous woman in her fifties bowls into the Rovers. Liz is thrilled to recognise her friend Erica from Spain and agrees she can stay for a few weeks over Christmas. Audrey and Maria are amused when Luke helps out at the salon hoping for an invite to their staff Christmas meal. Sean’s on edge as he prepares for Billy to meet the Grimshaws over tea.

Kylie’s a bag of nerves as an oblivious David cuts Callum’s hair, even accepting a £20 tip to spend on Max. When Callum then announces he’ll be in the Bistro later at the same time as the salon staff party, Kylie’s horrified. Arriving at the bistro she hisses at him to leave her alone but he insists she meets him later or he will call at No.8. Kylie’s trapped. Is Callum about to reveal his identity to the Platts and blow her secret or will she succumb to his demands?

Zeedan gleefully tells Gary that Owen’s taken over the sauna job at the gym. Alya attempts to calm Gary, who’s furious with Kal for employing Owen. He feels he stands no chance against her family’s machinations but Alya reminds him she makes her own decisions and will meet him later. But will Alya stay true to her word?

Tracy continues her charm offensive on Carla but snaps when Leanne reminds her about the overdue shop rent. What is she up to?

In the bistro, Gail catches impatient Erica helping herself to a drink, leaving the money on the bar. Irked by Erica’s brass neck, Gail orders Nick to throw her out and when he fails to do so, Gail flounces out herself. Feeling guilty, Erica offers to take over Gail’s duties. Nick’s impressed by Erica’s flair for customer service and offers to pay her, but she hands him her number and asks him to call instead! Sean’s desperate to make a good impression as Billy arrives at No.11 for tea. Despite Todd’s snide comments, Billy enjoys the Grimshaws’ company. Will they agree to see each other again? 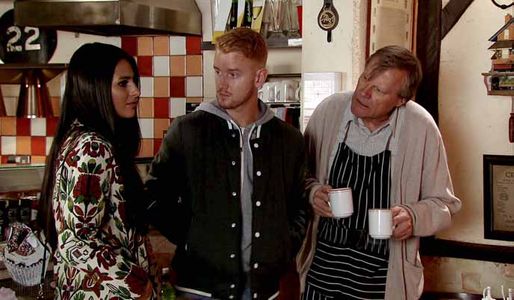