When Phelan assures Eileen he had a gentle word with Anna, Eileen softens towards him. Clearly seething, Kevin approaches Phelan in the builder’s yard and accuses him of deliberately setting out to destroy Anna. When Phelan mocks him, Kevin flies at him in a rage. Luke arrives, hauling Kevin away. Later, Luke tells Andy about Kevin’s fight with Phelan and how he reckoned Phelan had something to do with Michael’s death, confirming Andy’s suspicions. As Phelan locks up the builder’s yard, Andy appears from the shadows and hits him over the head with a brick. Phelan slumps to the ground. As Steph discovers Phelan’s lifeless body, is it the end of Phelan?

Having bought Michelle a huge TV for Christmas, Steve wonders where he can hide it. Meanwhile Robert and Michelle deliver the food order to some lads having a house party. When the lads refuse to pay, Michelle feigns labour pains and Robert grabs the food and hurries back to the van with Michelle following close behind him. As Michelle and Robert head home in good spirits, Michelle has a proposition for.

Brian and Tyrone do their best to talk Roy out of his decision to sell the café but Roy’s adamant it’s for the best for him and Cathy. Pointing out the for sale board outside the café, Brian begs Cathy to try and make Roy change his mind.

Mary tells Norris she’d like to accept his help. Luke joins Tracy and Amy for tea at No.1. How will Luke handle the heat when Amy quizzes him closely to make sure he’s suitable boyfriend material? ​​​ 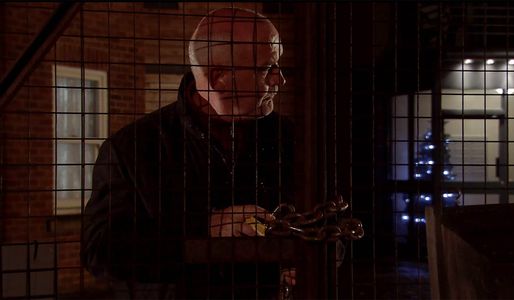