Furtive Robert phones the hotel where the wedding fayre is taking place to book a surprise room for he and Tracy. Suspicious Tracy wonders who he’s talking to. As Michelle and Carla arrive for the wedding fayre, they’re annoyed to see Tracy and Robert there (with a stand for the florists). Robert is equally surprised to see Carla whilst Tracy is now convinced they’ve organised a secret tryst. While Tracy deals with a prospective customer, Robert slips away to put the final touches to their surprise romantic night. Meanwhile, telling Michelle she needs her painkillers, Carla too slips away. Her suspicions heightened, Tracy follows Carla. Barging into Carla’s room and snatching her painkillers from her, Tracy demands to know where Robert is. Carla assures her she has no idea but Tracy rounds on Carla, revealing she knows all about their night of passion.

When Eileen moans about her kitchen cupboard doors, Jason promises to fix them when he’s got time. Phelan shows Jason a load of kitchen fittings he’s acquired and offers to sort out Eileen’s cupboards for her. Jason’s grateful.

Leanne calls at No.1 and showing Ken the video footage of the match, apologises to Simon for not believing him. Leanne assures Simon that she’s retracted her statement and he’s not in any trouble. Will Simon accept this and agree to return home?

Worried for Marta’s well being, Eva phones round the local homeless shelters but with no success. Taking his campaign duties seriously, Norris suggests a photo-shoot of Sally and Tim at home. Sally’s in her element as she and a reluctant Tim pose for photos.

In agony, Carla begs Tracy for her painkillers but enjoying the power, Tracy holds them out of reach telling her she deserves to suffer. Carla finally admits she had a one-night stand with Robert but at the time he’d split from Tracy and it meant nothing. Tracy seethes. But when Robert calls from reception and explains how he’s booked the honeymoon suite and dinner as a surprise for her Tracy’s wrong-footed. Pointing out that Nick will be devastated when he finds out about her sordid tryst, Tracy leaves. Finding Robert in reception she kisses him, giving nothing away. In her room Carla brings Michelle up to speed, conceding that Tracy holds all the cards and can destroy her life with Nick.

Eileen arrives home and is pleasantly surprised to find Phelan busy fixing her kitchen cupboards. Michael’s put out but when Eileen points out he’s had his opportunity and never got round to it, Michael’s chastened.

His hate for Leanne evident, Simon announces he wants to spend half-term with his Dad. Ken agrees to take him to Portsmouth and Leanne’s heartbroken.

Sinead admits she’s nervous about her forthcoming modelling assignment. Beth reckons she’ll be fantastic whilst Chesney’s less enthusiastic. Sally parks herself with Steph and Andy and bores them rigid with her political spiel. 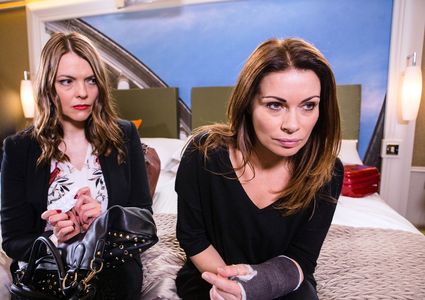