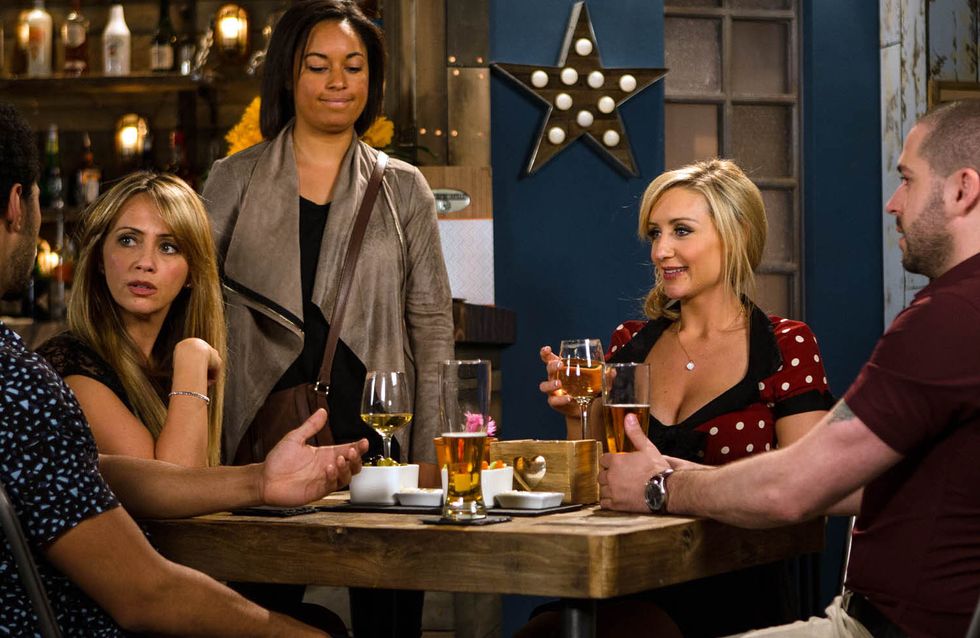 Aidan corners Maria and insists that last night was a mistake, she’s an amazing girl and Luke’s a lucky lad. Covering her disappointment, Maria assures him their secret is safe with her. Aidan calls Eva into the office and presenting her with a necklace, tells her he wants to forget about their recent fall out. When Eva quizzes him about the previous night, Aidan lies,making out he spent the evening with a mate. Luke takes Maria to the bistro for dinner, hoping to sort out their differences and suggests they should set a date for their wedding. At Steph’s suggestion, Aidan and Eva join Maria and Luke at their table. Maria admires Eva’s new necklace while Aidan masks his discomfort. When Caz calls in the bistro offering to collect Liam from the babysitter, she asks Aidan if he saw Liam’s toy car when he was round last night. Eva questions why he lied to her.

Robert advises Nick to sort out his relationship with Leanne as the tension between them is affecting the business. Nick takes his words on board. He apologises to Leanne and promises that from now on they’re just friends and he’ll stop hassling her. Leanne’s secretly gutted and when Nick flirts with a customer, Leanne feels jealous.

As Gary prepares breakfast for Izzy and Jake, Izzy watches him gratefully. WhenSean asks Gary what’s the secret of his successful relationship, Gary struggles for an answer and Izzy’s upset.

When Kirk suggests to Sean he should move in with Norris as he really enjoyed himself there, Beth takes offence. When Gemma calls in the Kabin offering her services, Rita explains they’re short of a paper boy. Gemma reluctantly heads out with the sack of papers. How will she get on?Having read an email from Michelle to Steve listing the best ways to a quick pregnancy, Tim realisesMichelle wants to start a family. Steve admits he’s not keen.

Maria comes to Aidan’s rescue and makes out he called round to get her opinion on a flat he was thinking of renting as a surprise for Eva. Eva’s thrilled.While Eva and Luke get a round in, Aidan rails at Maria for landing him in it and letting Eva think he wants to move in with her. Maria leaves upset. Luke wants to know why she left in such a hurry.Maria drops the bombshell that she thinks they should finish. Luke’s devastated. Having heard from Steph that Maria’s dumped Luke, Aidan makes his excuses to Eva and heads off to find Maria,worried she might have blown the lid on their moment of madness. Has Maria let the cat out of the bag? Meanwhile when Caz tells Liam that Luke and Maria have split up, before she’s had chance to explain things to her son, Maria’s furious and venting her rage on Caz she tells her to pack her bags and leave.

When Izzy suggests it’s time to head home, Gary’s clearly in no rush to follow and Izzy’s disappointed. Glad of an excuse not to go home, Gary agrees to a game of darts.

Tim gives Steve some tips on how to reduce his fertility. Sean butters up Norris telling him what a wonderful time Kirk had lodging with him and wonders if he might rent his spare room.A woman arrives in the Kabin to view Norris’ cabinet which he advertised on the trading website.While he isn’t looking, Maureen scratches the cabinet and then tries to demand a discount. Gemma recognises Maureen and tells Norris she’s a well known rip-off merchant. When Gemma threatens to phone the police, Maureen is forced to pay Norris £20 for the damage. Norris is impressed while Rita promises her she’ll nominate her for the Good Samaritan Award. Gemma’s chuffed.​​​​​​​