Having collapsed at the bistro, Michael wakes up in hospital. Gail explains they’re waiting for his test results. Steph goes looking for Gavin at his flat. Realising Gavin is at home but refusing to answer the door, Steph shouts through the letterbox that she’s not leaving until he lets her in. Gavin finally opens up and admits he was planning to do a runner. Showing Steph his passport, Gavin tells her he’s not who he said he was! Meanwhile the doctor comes with news of Michael’s test results.

Tony admits to Michelle he’s gone into business with Tracy and has yet to tell Liz.

Yasmeen informs Roy that she’ll be supervising his community service, as he’ll be working at the Community Centre. Anna’s scathing and accuses Yasmeen of siding with Roy over Gary. Yasmeen’s quick to put Anna in her place.

Luke’s nervous as he prepares for his outing with Maria and Liam. Roy gives Carla a pep talk about Manchester Business Woman of the Year, pointing out it’s an accolade and she should accept it with pride. Will Carla change her mind about the awards?

Michael and Gail are shocked to hear that Michael needs an urgent heart operation. Meanwhile Steph’s dumbfounded as Gavin explains he’s not actually Gavin, but Andrew, a friend of Michael’s son Gavin. Andy tells Steph he never intended to hurt anyone, it was simply a joke that spiralled out of control. Steph’s adamant he must tell Michael the truth. But when she hears Michael needs open heart surgery and any stress could kill him, Steph rushes to No.8 and drags Andy into the garden, explaining he mustn’t tell Michael the truth as the shock could kill him. Realising they’re keeping something from him, Michael demands answers!

Liz and Steve return from Spain. Steve remains as depressed as ever and Liz confides in Tony that she’s secretly booked him a doctor’s appointment. Meanwhile after a pleasant evening with Hamish, Michelle invites him back to Carla’s flat.

Awash with guilt, Roy tells Carla how his community service isn’t adequate punishment. Carla reckons he’s being too harsh on himself.

In an attempt to buy his approval, Luke presents Liam with a new football. Liam’s underwhelmed and when he falls over and hurts himself during a kick about it brings the evening to a swift end. Luke’s disappointed. 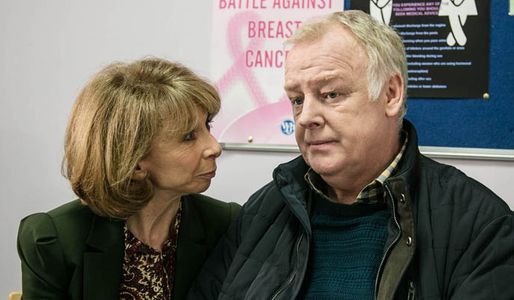