Having flashed her underwear at Luke in the garage, Tracy heads off grinning. Meanwhile Phelan hangs around the garage, desperate to get his hands on Kevin’s laptop to destroy the CCTV footage of his conversation with Todd, but Kevin tells him to do one. Quietly fuming, Phelan orders Andy to burn down Kevin’s garage, telling him it’ll be the worst for Steph if he fails to do so. At the bistro, Phelan laces Kevin’s drinks with vodka before promising Robert and Steph that he’ll get him home. When Tracy overhears Freddie talking about the new CCTV, she’s mortified, realising they’ll have images of her in her underwear. Dragging Luke out of the pub, Tracy insists they must delete the footage immediately. Phelan guides Kevin to theold garage and having stolen his keys, leaves him on the back seat of a customer’s car in a drunken stupor. Phelan hands the keys to Andy who lets himself into the new garage and prepares for the task ahead. But when he’s interrupted by the arrival of Luke and Tracy, is Andy about to be discovered?

Nick confides in Leanne that he’s worried Michelle’s baby might have had a genetic defect which caused the early labour and Leanne does her best to reassure him. Meanwhile, Michelle hides away in the bedroom, desperately missing her baby and unable to face the outside world. Steve’s at a loss for what to do.

Bethany shows Nathan some pictures on her phone of hair and makeup which she’s done for friends. Nathan’s impressed and offering to give her his old camera, suggests she should do online tutorials. Bethany’s flattered.

Gary returns from Germany and is gutted to find out from Dev that the gym has gone bust. Meanwhile when Chesney turns down Sinead’s invitation for a date night, will she acceptDaniel’s offer to buy her a drink instead?

Satisfied they’ve deleted the saucy footage from theCCTV Luke and Tracy head out, locking the new garage behind them. Andy breathes a sigh of relief.Freddie, Tyrone and Luke find Kevin sprawled out in the back of a car in the old garage but realising he’s drunk they leave him to it. Seizing the moment, Andy sets fire to the new garage and grabsKevin’s laptop as he does a runner. Brian spots the garage fire and orders everybody to stand clear while he calls the fire brigade. As the fire rages Phelan allows himself a satisfied smile, while Freddie,Tyrone, Luke and Kevin watch in anguish. Having returned home a shaken Andy shoves Kevin’s laptop in a cupboard and his fire damaged clothes in the washing machine. Steph arrives home and discovers Andy’s blackened clothes. Glad to finally unburden himself, Andy tells Steph how he attacked Phelan as revenge for Michael but Phelan’s been blackmailing him ever since. Steph listens aghast at his list of crimes. Will Steph report Andy or stand by her man?

In the cab office Eileen hugs Steve and over tea and biscuits, tells him of her secret wedding plans. Steve’s grateful for the distraction. Michelle emerges from the bedroom and wonders where Steve’s got to. When Liz explains that he’s popped over to Street Cars, Michelle’s deeply hurt. When Nick tentatively asks Steve why baby Ruairi died and if it could possibly be something genetic, Steve punches him. Having clocked their exchange through the bedroom window, Michelle’s horrified and a further strain is placed on their relationship?

Sarah admits to Gary how much she missed him and they kiss passionately. Are they back on?

Telling Tim that communication is the key to a healthy marriage, Sally insists that from now on, they’ll only have sex after an improving conversation. 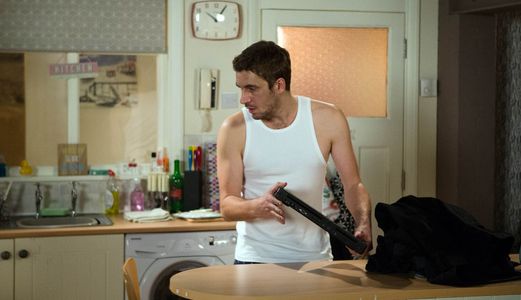