Callum calls in the salon, passing David a package and insisting he looks after it for the day. Feeling threatened, David has no choice but to agree. Sally watches, intrigued, before telling Gail about the fracas and how he forced David to accept a strange package. Finding Callum’s package, Gail tells Sally the man’s a drug dealer and she’s taking it to the police station. When Callum calls at No.8 for his package, David’s baffled to discover it’s gone. In a fury, how will Callum react as he demands to know what David’s done with it?

Feeling vulnerable, Faye tells Gary, Izzy and Katy they mustn’t let Linda destroy the family. They assure her that won’t happen. But when the family catch Katy sharing a drink with Linda before she heads back to Portugal they’re horrified. Izzy rips into Linda calling her a disgrace. Linda snaps and tells Owen it’s time the girls found out the truth.

When Jason confides in Todd how he’s planning a surprise trip to New York for Eva, conniving Todd encourages Jason to call at Tony’s flat to discuss it with him, hoping he might catch Eva and Tony together discussing houses.

Clearly in a good mood, Kevin tells Tyrone and Luke he’s met someone. Julie and Mary battle for supremacy, each trying to assert their authority over the children.

David tears the house apart looking for the package. Callum tells him he’s got an hour to find it or he’s taking Max. Gail and Sally are on pins as the police officer opens Callum’s suspicious package. They’re stunned to discover it’s an empty box. What is Callum playing at?

Linda denies that she left because of Izzy’s disability and explains it was because she had an affair which she deeply regretted. Izzy and Katy listen, shell shocked, realising how Owen has lied to them. As Izzy and Katy turn on Owen, Anna looks at him with disgust. Linda later calls in, revealing she’s decided to stay around in the hope of forging a relationship with her daughters. As Owen breaks down, will his girls forgive him? Meanwhile Craig and Faye work out that Faye must be 7 months pregnant. Faye’s horrified and under pressure, promises to tell Anna. But when she returns home to find Anna upset, will a guilt ridden Faye feel she can unburden herself?

Tracy and Tony spend the afternoon in bed at Tony’s flat. When Jason knocks at the door, Tony fobs him off, but as he makes to leave Jason hears a woman’s voice. Jason confides in Todd how he reckons Tony’s playing away. Can Todd steer Jason into thinking it might be Eva?

Determined to clear the air, Julie summons Mary and Sophie for tea. 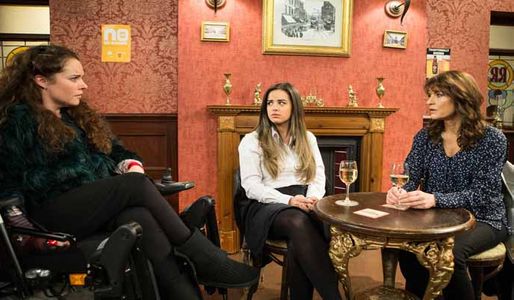