Beth's upset that Craig's turmoil is over his dad and decides to explain to him that his dad was an alcoholic and ran away when he found out she was pregnant. Craig immediately feels guilty about lying and runs off.

Karl finds him crying in the backyard of The Rovers and is floored when Craig tells him he's the one who burnt down the pub when he threw away a cigarette because he saw Karl coming out. Of course, Karl knows this isn't true…

Elsewhere, Tina wants to move on and decides to go and see Jake - but will Gary and Izzy let her after she lost it in the pub?

Also, it's the morning after the night before and Sally has doubts she made the right move.

Karl panics and rushes after Craig, knowing he has to stop him from talking to anyone about the fire. He drags Craig into his car and struggles to keep a lid on his emotions, revealing that he started the deadly fire. But he warns Craig he must keep quiet - unless he wants to go to prison.

Elsewhere, Tim says goodbye to an angry Faye, who believes he never cared. He hates that Anna and Owen have made him enforce such heartache, but knows it's for the best in the long run. In his emotional state he turns to Sally, who tells him she wants him to stay.

Also, as Tina holds Jake, she's honest with Gary and Izzy - it's painful for her but she'd like to play a part in Jake's life. 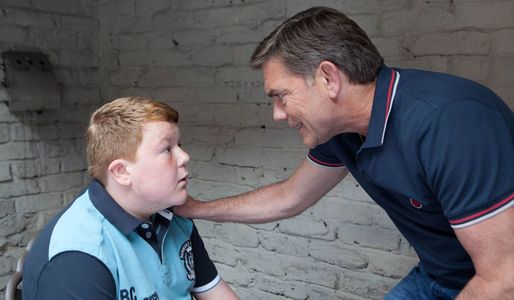 Coronation Street 02/08 - Nick's night with Kylie could be exposed

Coronation Street 16/06 - Is Aidan's Secret About To Be Blown?