Phelan apologises to Eileen for snapping but she’s still troubled by his secrecy. After visiting the development, Michael informs Eileen that the site’s deserted. He relays Phelan’s phone conversation and how he mentioned going to Mexico. Meanwhile, challenged by Seb to prove she’s not a killjoy like Craig, Faye steals Phelan’s mobile in the café. Elsewhere Eileen tackles Phelan about his secret plotting, and although rattled, Phelan is lucky that Eileen catches Tim eavesdropping and he uses the diversion to slip away. Michael’s mind whirs when Tim divulges that Eileen confronted Phelan earlier. Phelan joins Eileen in the Rovers where Michael, unable to hold his tongue, accuses him of hiding something in his rucksack. With all eyes on Phelan, what trick does he have up his sleeve to escape this conundrum?

Kirk tearfully reveals that Maria’s been charged with murder. Aidan’s gutted that he’s made things worse for her by failing to dispose of the scissors.

A flashy new Jaguar sweeps onto Coronation Street and parks outside Underworld. Adam Barlow steps out, strolls into the factory office and helps himself to some whisky. Arriving back from a meeting, outraged Johnny and Aidan order him to leave whilst Tracy’s impressed by Adam’s car as he drives her and Peter to visit Ken. However, Adam, Peter and Tracy are thwarted at the hospital when Ken’s nurse insists he still doesn’t want to see them. Patience snapping, Tracy bursts into Ken’s room followed by Adam and Peter. They are taken aback to find a bespectacled young man reading to Ken and even more stunned when he introduces himself as Daniel, Ken’s son.

To explain David’s black eye, Sarah admits to Gail she’s seeing Gary and he knows the truth about the crash. Gail thinks it’s a recipe for disaster. Meanwhile, Gary refuses to put Sarah’s mind at rest over David, needing more time to think. Will Gary be willing to keep David’s secret for the price of his relationship?​​​ 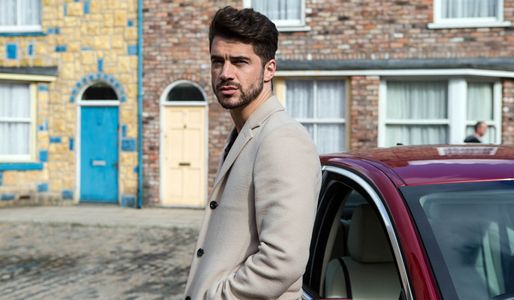