As Phelan lies unconscious in a hospital bed, Eileen confides in Todd that Anna’s been sending him hate mail and she suspects Kevin may have attacked him. In the café, Andy overhears Tim telling Sally that he saw Kevin, clearly wound up, heading for the builder’s yard at around the time of the attack. When Anna and Kevin learn of Phelan’s plight, Kevin’s pleased whilst Anna’s worried he could find himself in the frame even though he’s innocent. The police question first Steph then Andy about finding Phelan after his attack. In an attempt to deflect the blame, Andy tells the police what he overheard in the café and suggests Kevin’s their prime suspect. The police call at the garage and question Kevin. Kevin admits he hates Phelan’s guts but assures them he didn’t try to kill him. Will Phelan regain consciousness or has Andy but an end to his evil deeds once and for all?

Norris, Dev, Erica and a nervous Mary set off to Newton-le- Willows hoping to find some answers about her past. David finds himself railroaded by Sarah into joining Chesney, Sinead, Billy and Todd for a night on the town. After spending the night with Maria again, Adam’s loved up but Maria remains distant and Adam’s put out. Excited at the prospect of Robert moving in, Liz sets about cleaning the back room but will Robert trust his growing reservations over his feelings for Michelle?

​​Andy does his best to remain calm as talk of Phelan’s attack spreads. His nerves in shreds will he be able to hide the gruesome truth from Steph and the police or are they onto him? Meanwhile will Phelan make a recovery or is it now a murder investigation?
​

Mary returns home having failed to find the missing piece of her past. She tells Norris, Dev and Erica that she’s calling off the search, can Norris encourage her to persevere?

Shrouded in grief, Gail shows Bethany the haul of presents she’d bought for Michael and wonders how on earth she’ll get through Christmas. Sarah reveals she’s bought tickets to a gig as a Christmas treat. But when it becomes apparent that she’s invited Gary too, Bethany hides her dismay.

Having entered a busy club, Billy, Todd, Sinead and a reluctant Chesney hit the dance floor whilst David remains at the bar. A woman called Shona parks herself next to him and tries to chat him up but David’s unresponsive. However things turn from bad to worse for David when he makes a shocking discovery.​​ 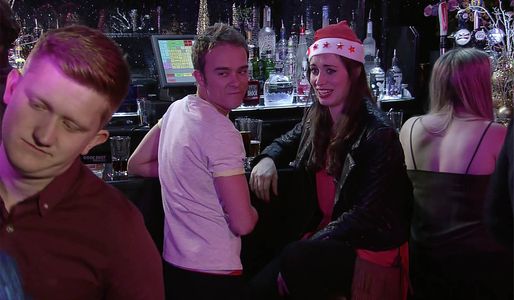 Coronation Street 16/12 - The Platts are rocked by a bombshell