Coronation Street 16/12 - The Platts are rocked by a bombshell

As David and Kylie snipe at each other, Todd calls in the Salon and suggests to David and Kylie that now Sarah’s pregnant with Callum’s baby, she could do with their support. Having overheard every word, a shocked Bethany stalks out of the Salon. Interrupting Sarah’s lunch with Audrey and Gail, Bethany plonks herself down and announces that Sarah’s pregnant with Callum’s baby. Audrey and Gail are gobsmacked and lay into Sarah, wondering how she could be so stupid. Concerned for Sarah, Billy intervenes but Gail sends him away with a flea in his ear. Meanwhile as David and Kylie continue to row, David tells Kylie that he’s moving out because much as he loves her, the trust has gone and their marriage is dead. Kylie’s stunned.

Eileen proudly shows Michael an article in the Gazette featuring a picture of him and talking about his Good Samaritan nomination. Michael squirms as Eileen makes him practise his acceptance speech should he win the award.

When Anna receives a text from Barry, a guy she met at the Singles Night, how will she respond? Tracy confides in Robert how worried she is about her business. Robert suggests she should do something she’s passionate about. Tracy admits she was happy when she was a florist. Meanwhile Tracy takes a call from Rob in prison and promises she’ll visit him again soon. 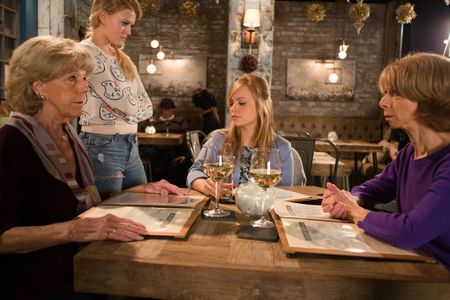 Coronation Street 16/3 - Sarah is rocked by a pregnancy scare