Coronation Street 16/5 - Jenny's haunted by her past

Jenny tells Rita she’s heading to Blackpool for the day with Johnny in the hope she can finally lay some of her demons to rest. In Blackpool, Jenny shows Johnny the place where her dad was hit by a tram all those years ago.

After letting Nick spend the night on the sofa at No.8, David implores him to get his scan results and talk everything through with Carla. Carla confides in Michelle that Nick’s called off the wedding and she’s worried he may have found out about her one night stand with Robert. Carla corners David in the salon and demands the truth. How much does he tell her before Carla heads off to find Nick?

When Sean makes a dig at Billy pointing out that they’d now be in Ibiza if it weren’t for him, Billy snaps at him leaving Sean shocked. Sean confides inTodd that he’s worried Billy may have met someone else.

Determined not to let Sally spoil his trip, Tim announces that he’s going with Kevin andJack instead. Tim, Kevin and Jack take a selfie on the Promenade and Tim posts it online. Sally tells Sophie she’s off to Blackpool to save her marriage. A chuffed Tyrone announces to Luke and Freddie that he’s finally obtained his taxi licence.​​​

Sally and Sophie set off to Blackpool to track down Tim.Linking arms on Blackpool pier, Jenny tells Johnny about her troubled life. Having arrived inBlackpool, Sally’s horrified to spot Tim spoon-feeding Kevin in a café. Whilst Sally rails at Tim accusing him of playing happy families with Kevin, Jack vanishes from the café. He careers across the road, straight into the path of a tram, before one of the party dashes to the rescue.

Nick reveals to Carla how he once hit Leanne and its cares him that he could do the same to her. Carla assures him she loves him and she’s going nowhere. The consultant confirms to Nick that his condition is stable but he must try and avoid stress. Carla confides in Johnny how worried she is that if Nick ever finds out about her fling withRobert, the stress could cause him a serious meltdown.

Lee calls in the Rovers and scrapes together the money for a pint. Gary clocks Lee about to steal from Erica’s handbag. Liz threatens to call the police but Billy steps in and assures her he’ll handle it. Sean’s perplexed to hear Billy offering the lad a room at the rectory.

When Gary tells Anna he’d prefer her not to attend his court case, Anna’s hurt.After a game of darts, Kylie suggests to Freddie he accompanies her back to No.8 and helps her put the kids to bed. Freddie’s touched.​​​ 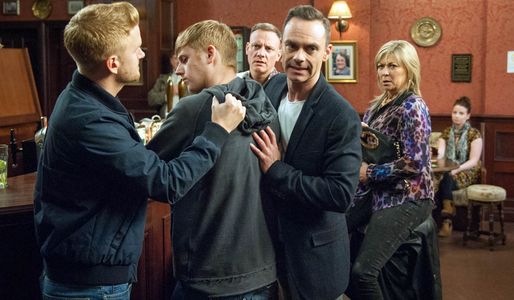