Eileen and Phelan anxiously await the planning committee’s decision on whether or not the Calcutta Street development can proceed. In the Rovers, Vinny takes a call confirming planning permission has been granted. Eileen’s delighted, still blissfully unaware of Phelan’s plot to fleece buyers. Eileen gives Todd the good news but he remains cynical. Phelan jubilantly tells Eileen he’s going home to call the architect to get the ball rolling. Suspicious Todd follows. At No.11, Phelan phones the architect and explains his services are no longer required. He’s alarmed when Todd walks in, having overheard the call. Todd accuses Phelan of running a scam,selling flats that will never be built. Can Phelan talk his way out of trouble?

Kirk’s spent the night on the sofa. Beth explains she cut all ties with Darryl to protect Craig but Kirk can’t get over how she’s lied to him. When Johnny ticks off Beth and Kirk for arriving late for work, Beth bursts into tears leaving Johnny bemused and the factory girls speculating on the cause of Beth and Kirk’s row. A miserable Kirk reveals the truth about Beth to a gobsmacked Maria. While there’s another shock in store for Beth when her past catches up with her.

​Anna tackles Roy about sharing his bedroom with Cathy. Roy’s reticent, pointing out that it’s Hayley’s room too, but it’s clear Anna’s words have had an effect.Cathy’s puzzled when Roy offers to move into her bedroom, freeing up his for Alex.
​

As Todd promises to move out, Billy resents having to compromise for the sake of his job. Billy confides his troubles to Sarah. When she jokes that he should be a social worker rather than a vicar, Billy’s given food for thought. Billy shocks Todd by suggesting he might leave the church for him. As they declare their love for each other, Todd’s torn.

As Todd heads to the Rovers to inform Eileen of the scam, Phelan makes a panicked call to Vinny. Acting quickly, Vinny tips his pint over Eileen’s mobile to render it useless then whisks her to his car, claiming Phelan’s got a surprise lined up for her. Todd’s alarmed to find that Eileen’s disappeared. Vinny delivers Eileen to a waiting Phelan at the Calcutta Street site.Eileen’s impressed by the scale of it. Eileen’s excited by the mystery when Phelan announces he’s got a further surprise planned and packs her off in Vinny’s car again. Phelan returns to No.11 alonewhere Todd demands to know where Eileen is. Assuring Todd she’s safe, Phelan offers to cut him in on the deal. But before Todd can react to Phelan’s offer, the police arrive to investigate his allegation of fraud and Eileen’s disappearance. Todd’s tense as unruffled Phelan’s taken away.

The factory girls discuss Beth’s past. Kirk’s gutted to realise his marriage is based on lies, while Craig’s adamant she deserves to pay for all her deceit. Beth seeks comfort from Kirk but he says she’s ruined everything. Kirk turns up on Maria’s doorstep with his bags. Maria hugs him as he dissolves into tears.

When Roy reveals he’s ordered a new double bed for them, Cathy’s troubled to realise he doesn’t want her in Hayley’s old bed or her old room.Anna tries to cheer her up but Cathy feels she’ll always be second best to Hayley.

Audrey giggles at Freddie’s chat over dinner at the Bistro. As he kisses Audrey’s hand,Freddie is unnerved to spot a woman throwing him a filthy look. While Audrey powders her nose,Freddie’s shaken when his old friend Angelica rails at him for dating again so soon after Sadie’s death.​​​​ 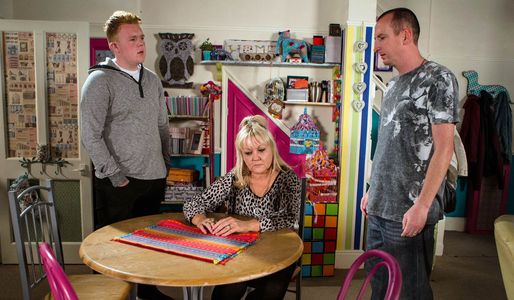