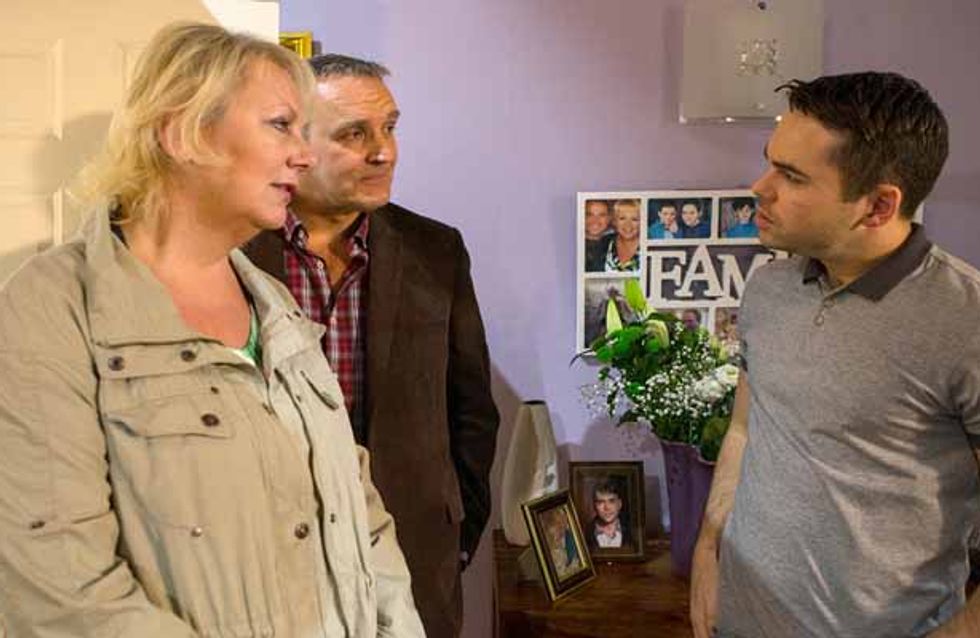 Pointing out that she’s family, Sarah tells David he can’t throw her out. But David is adamant that she and Bethany are not welcome. When Callum calls at No.8 to see Max, Sarah bemoans her predicament. Will Callum be interested to hear she’s sticking around? Meanwhile when Sophie lets slip to David that Gail is often in the shop buying flowers, he decides to follow her. Having followed Gail to the cemetery, David watches her from a distance. Is David about to make a shocking discovery about Gavin Rodwell?

Worn out after a long walk, Sean and Billy find a country pub. They book a room for the night but it’s clear the landlord is disapproving. Making out there’s been a double-booking, the landlord tells Sean and Bill there’s no longer a room available.

Tracy fantasises to Tony about running the Rovers and reminds him that although Liz and Steve own half each, Steve owes him big time. Backed into a corner, Tony lies to Liz, claiming he’s made a bad investment and a loan shark wants his money back.

As Eileen prepares for her date with sensible Adrian, she fantasises about Jeff, showing off his photos. Todd smirks, enjoying winding Eileen up. When Faye moans about the lack of space in her bedroom with all the baby’s things, Anna snaps that she should have thought about that before having sex at the age of 12.

David catches up with Gail outside the cemetery and telling her he knows she visited Gavin Rodwell’s grave, demands to know what’s going on. Will Gail be forced to confess the truth about how Andy stole Gavin’s identity and she’s been keeping the truth from Michael? Meanwhile after an afternoon of sex with Sarah, Callum makes to leave but as he heads to the door, David arrives home. Callum quickly covers, making out he just called in to see Max. Max is thrilled to see his Dad whilst David seethes. Going in for the kill, Callum tells David he’s cancelled their mediation sessions and he’ll see him in court. David reels!

When Billy and Sean confront the pub landlord, accusing him of fabricating the double-booking to disguise his homophobia, he demands they leave. Billy opens up to Sean and admits his true feelings for him. Sean’s thrilled and they kiss passionately.

Tony tells Liz he owes the loan shark £25k and he needs the money quickly. Liz suggests Steve could sell his share of the Rovers and repay Tony the money he borrowed to settle his tax bill. As Tony assures Tracy he’s put their plan into action, how will Steve react to the news of Tony’s predicament. Will he be prepared to sell his share of the pub?

Anna tells Faye she won’t be returning to school any time soon as she has to accept she’s now a mother. Despondent, Faye chats to Craig about the baby, trying to convince herself that she’ll grow to love her. Determined to make an effort, Faye asks Anna to show her how to change a nappy and announces she’s naming the baby. Is she turning a corner? As Eileen and Adrian enjoy a drink in the pub, Todd makes digs about Eileen’s other love interest in Dubai. Will he scupper her fledgling relationship with Adrian? 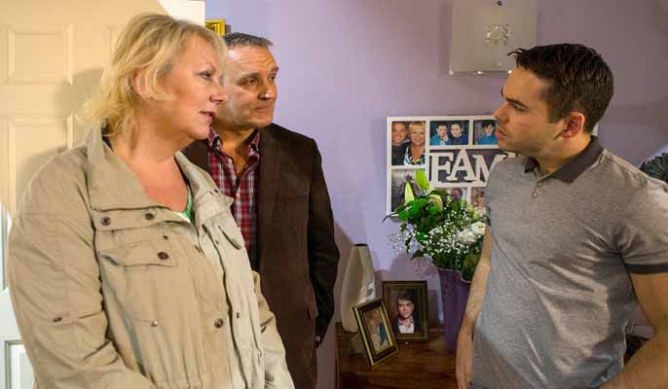