Jim makes it clear to Peter he doesn’t want Steve to find out he supplied the booze that almost killed him. Peter’s dismissive but when Peter and Clelland find their cell trashed Peter realises Jim was behind it. Clelland warns Peter not to antagonise Jim but will Peter bow down to Jim’s threats?

Tony tries again to put an end to the rift with Tyrone and Fiz and offers them £5k to drop the case. Eileen and Eva also beg them to reconsider, explaining none of the mess is Jason’s fault yet he stands to lose everything. As Todd watches on, knowing he’s an outcast, will Tyrone agree?

A worried Ken and Deirdre search for Eccles who remains hidden.

As Neil continues to taunt Andrea and Lloyd will she agree to tell the police it’s Neil who’s harassing them? Gail helps Michael set up an online profile in order to try and track down his father. 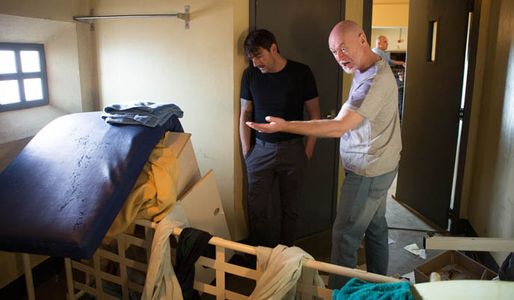