David watches Gail and Kylie from a distance, and feeling depressed about his lost family, he goes to the Rovers for a drink. After becoming aggressive with Tina, Peter intervenes and takes David outside.

David goads Peter into hitting him, but Peter ends up with a cut to the eye as Gail and Dierdre watch in horror. Kylie threatens him with calling the police, but Gail is conflicted. Will she persuade Audrey to take David in?

A love-struck Sean invites Todd to go for a drink with him, offering to pay when Todd sneakily claims he can’t afford it. Todd then does a shift at Streetcars when he takes a call for an airport run. There are no drivers but Todd spots the keys to the spare cab and decides to earn himself a little bit of extra cash...

When Eileen and Lloyd return, they anxiously try to locate the missing taxi. When Todd returns, he has a well-rehearsed excuse as to what happened to the cab, but will Lloyd and Eileen believe him?

Hayley happily throws herself into making Carla’s wedding dress, though worries that she may have taken on too much. Roy begins to feel left out as Hayley’s time is consumed, but makes peace with his lie when he sees how happy Hayley is.

​Elsewhere Nick prepares himself for his first day at work, whilst Brian is offered a job and worries about telling Julie that he doesn’t want to foster. 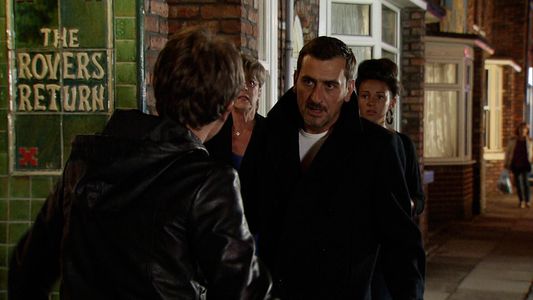