As Tim and Anna share a laugh in the café, Sally enters and clocks their intimacy. When Sophie and Maddie then see Tim slipping through the backdoor of No.6 carrying a bunch of flowers, they break the news to Sally. Inside Anna is giving Tim his reading lesson when suddenly Sally bursts in with a face like thunder, demanding to know what’s going on!

As Michelle prepares for the hoedown party she’s organising it’s clear she’s going to get no help from hungover Steve. Desperate to avoid Michelle, Steve sneaks back to the bistro and guiltily orders up a cocktail. Steph’s amused to see him back again.

When Carla moans about how hard it’s proving to find a trainee manager, Alya overhears and asks if she can apply for the job. As Alya prepares for her interview, Leanne warns her how scary Carla can be.

Owen’s cheered when Tony offers him some work on a warehouse conversion. Michael and Gail head into town, back to the bar where hopefully the manageress has Gavin’s contact details.

Knowing he’s in the dog house, Steve apologises to Michelle, explaining he simply fancied a change of scene. He promises it won’t happen again and when he offers to help at the hoedown Michelle thaws. Meanwhile when Steve spots a sports car parked at the garage, he ignores Kevin’s words of caution and makes a rash decision to buy it. Calling in the bistro he excitedly tells Steph how he bought a sports car and insists she joins him for a spin. As Michelle prepares to set off for the hoedown, will Steve let her down again?

Gail and a nervous Michael seek out Gavin’s house. Nobody’s in but Gail insists Michael pushes a note through the door. Michael later gets a call from Gavin asking to meet him tomorrow. Michael’s petrified. Meanwhile Kylie’s on edge when she receives a text from Callum suggesting they meet up. Tempted, will Kylie agree?

Alya approaches Carla with trepidation. She’s surprised and utterly thrilled when Carla offers her the job of trainee manager.

When Dev laments to Mary that he’s been invited to a posh birthday party but has no
one to go with, Mary insists she’ll be his plus one. Dev has little choice but to agree. Tim’s touched
when Faye offers to teach him to read but will Sally be so forgiving? 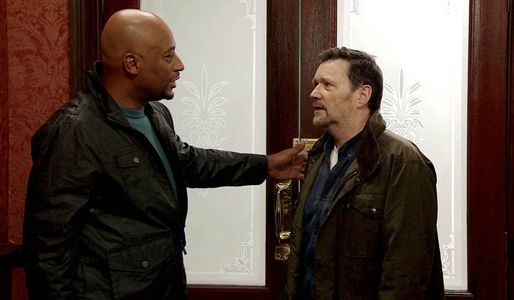