With Tracy calling the shots, Carla confides in Michelle that she’s no option but to tell Nick about her night with Robert and hope he’ll forgive her. Carla calls in the bistro and summons up the courage to confess all to Nick. But she’s thwarted when Nick shows her some earrings which Gail has offered to lend her for the wedding. Tracy corners Carla and gives her an ultimatum; persuade Nick to sell his share of the business to Robert and move away or her relationship with Nick is history.

Having finished work on the Arches, Phelan bids farewell to Jason, handing him the name of a contact in the trade and suggesting he gives him a ring. Glad to be rid of Phelan, Anna and Kevin head into town to celebrate. But having been summoned by Jason, Phelan returns to No.11, where Jason explains that he rang the contact and he’s landed a big new contract!

As Sinead heads for her photo shoot, she begs Chesney to come along for moral support. The shoot underway, Sinead enjoys modelling the new underwear range. Aidan and the O’Driscolls are impressed with her skills whilst Chesney remains uneasy. Walking on air, Sinead reveals the photographer has offered her another job, modelling for a catalogue. How will Chesney feel about this?

When Gail imparts the news that Freshco are planning a new superstore, Norris vows that he and Sally will fight them all the way. Norris drafts a letter to the Gazette which Mary encourages him to post it without consulting Sally. Sharif and Yasmeen present Alya with a vintage sewing machine for her birthday. 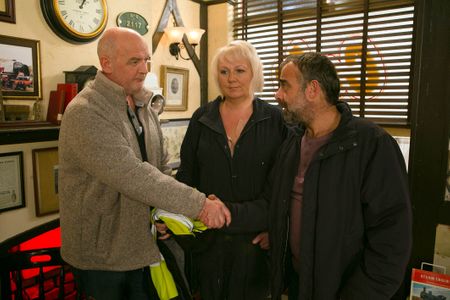 Coronation Street 3/2 - It's small steps for Carla and Johnny