As the fire investigator sifts through the charred remains of the garage, he finds a set of keys. Kevin surveys the scene, distraught. Steph tells Andy they’re flying to Portugal on Friday (to stay with Katy) and need to focus on getting as far away from Phelan as they can. As they tell a perplexed Luke of their plans to move Portugal he wonders if there’s more toit than they’re letting on. Meanwhile when Kevin tells Tyrone that he intends to sell the garage once the insurance has paid out, Tyrone becomes suspicious, especially when the fire investigator confirms that the blaze is now in the hands of the police as they suspect it’s a case of arson. The police confirm that with no sign of a forced entry and no sign of Kevin’s laptop it looks like arson. AsTyrone confronts Kevin over the fire, suggesting he started it himself, the police arrive. Will Kevin be arrested on suspicion of arson? Meanwhile Eileen reveals to Liz that she’s marrying Pat tomorrow.

Telling Liz that she’s disgusted with Steve who’s behaving like nothing has happened, Michelle heads off to visit Ruairi in the Chapel of Rest. Steve breaks down and confesses to Peter that Leanne is pregnant with his baby and he blames himself for Michelle’s ordeal as it’s payback for his terrible behaviour - will Peter be able to offer any words of comfort?

Shona starts work at the café. When Roy explains the difference inVAT on ‘eat in’ or ‘takeaway’ food, Shona does her best to appear interested. In retaliation for Sally’s sex ban, Tim imposes a talking ban. Daniel thanks Sinead for all her help with his MA application and presents her with a venus fly trap. Sarah breaks the news toBethany that she and Gary are back together.​​​ 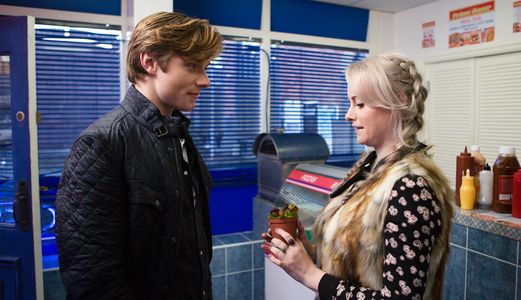