Making out he’s got a dental appointment, David skips off work and meets Callum in the ginnel. Gail’s suspicious. Callum hands David a wrap of coke and an address and orders him to deliver the drugs for him. David is forced to agree but later flushes the coke down the drain. Enlisting the help of Nick and Gavin, David announces they’re going to confront Callum and tell him to leave them alone. But as David, Nick and Gavin are about to set off, Gail stops them, declaring that she and Audrey will sort Callum out. Confronting Callum in the Dog & Gun, Gail orders him to stay away from her family but Callum insists he has the right to see his own son. Losing her temper, Gail tells Callum that David flushed his drugs down the drain. How will Callum react as a terrified David worries that they’ve made matters a whole lot worse.

Kevin meets up with his internet date, Jenny Bradley. They reminisce about the old days and Jenny asks after Rita. When Kevin suggests they meet up again, will Jenny be as keen?

Julie’s horrified when Mary comes in the shop and helps herself to some groceries without paying. How will Mary react when Julie accuses her of shoplifting? Faye confides in Craig that she can’t bring herself to tell Anna about her pregnancy and plans to give birth in secret and leave the baby outside the hospital. 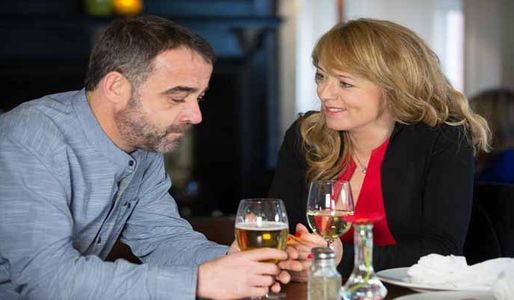