Sinead begs Chesney to reconsider, pointing out that Joseph should be with his Dad and not hundreds of miles away but Chesney’s resolute. In desperation Sinead insists on Kirk taking her home. She explains how she intends to have a last ditch attempt at changing Chesney’s mind about letting Joseph go. But when Beth finds Sinead sprawled across the kitchen floor, having fallen out of her wheelchair, she phones for an ambulance. Back in hospital, Sinead tells Chesney to dump her and focus on Joseph. How will Ches respond to this?

David and Callum attend their first mediation session. Callum loses his temper in front of the mediator and David’s quietly pleased. But in the waiting room David’s unimpressed to find Gail getting on well with Callum’s Mum and ushers her out.

Andrea and Michelle cajole Lloyd into taking Steve to a northern soul night but it’s clear the old mates are awkward in each other’s company and making excuses, Steve bails out. Back at the Rovers, Steve’s downbeat as he explains to Michelle how he feels his friendship with Lloyd is a thing of the past and he doesn’t know how to fix it.

Having had a call from Tony to say she can move back into her flat, Leanne suggests to Kal he should move in with her. Will Kal agree? With his family seemingly falling apart can Owen salvage his relationship with Anna and his girls? When Gail hands Sharif a bowl of eggs, explains she found them under the hedge, Sharif’s thrilled. 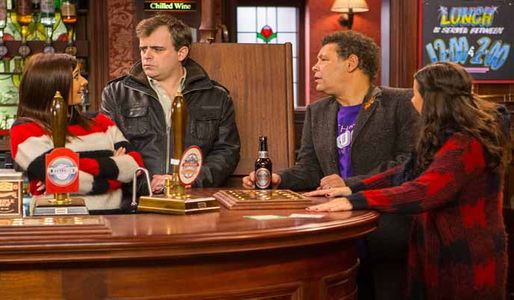