David’s nervous as he prepares for Max’s custody hearing. In the waiting room, David suggests to Callum they sort out access to Max between them, but Callum’s not interested, telling him he’ll see him in court. David’s lawyer paints him as the doting Dad but David’s good mood is short-lived when Callum’s lawyer launches a character assassination, dragging up David’s criminal past. As Callum’s lawyer lists David’s past misdemeanours will David be able to keep his cool?

Faye begs Anna to let her stay another night at No.4. Tim assures Anna it’s fine and Sally is forced to agree. But Sally’s put out when Tim invites Anna to join them for dinner. The two women are soon bickering. How will they react when Tim likens them to Faye and Jackson bickering over naming the baby? Will they all realise they’ve got bigger fish to fry?

Tony purposely lets slip to Steve that he and Liz would like to move to Spain but Liz feels she can’t as she has to look after Steve. Will Liz agree that Steve no longer needs baby-sitting or will she be annoyed by Tony’s interference?

When Tony winds Zeedan up, pointing out Leanne has to fight his battles for him, Zeedan’s furious and resolves to get revenge. As Carla and Nick try out canapés for Michelle’s wedding reception, Erica clocks their intimacy and invites Nick to join her at her ante natal class. Will Nick agree and where does that leave him and Carla?

Calming himself, David returns to court and apologises to the Judge. The Judge orders a full Cafcass report but what decision will be made about Max’s living arrangements in the interim? Will Callum be granted access to Max? Back at the Platts David is raging following his character assassination, accusing Sarah of furnishing Callum with details of his past and risking his chances in court. Sarah denies all knowledge so where did Callum get the information?

Liz confides in Michelle that with Steve now on the mend, she feels the time is right to take the plunge and start a new life in Spain with Tony. Liz announces that she plans to move to Spain and is going to approach Travis Ltd and see if they’d like to buy her half of the pub too whilst letting Steve and Michelle continue to run it. Is Tony’s plan coming together?

Over dinner, Anna, Tim, Sally and Faye discuss Christening ideas for Miley. Tim’s pleased to see Anna and Sally making an effort to get on.

When Leanne catches Zeedan approaching Barlow’s Buys with a crowbar, will she be able to talk him out of doing something stupid? Nick invites Erica to stay the night. 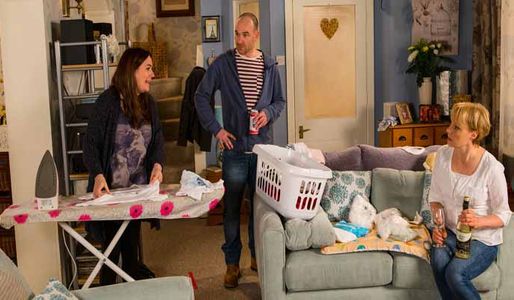