Andrea phones Lloyd and confirms she’ll be moving in today. After confiding in Michelle, she breaks the news to Neil that their marriage is over, but insists no one else is involved. Will Neil accept her story?

When Deirdre and Tracy visit Peter in prison and ask why he sacked his solicitor, he’s gutted to realise they assumed he must be guilty.

Dennis tells Norris he intends to win Rita back and won’t be beaten. But what plan does he have up his sleeve?

Elsewhere, whilst returning an overdue library book which Hayley borrowed, Roy discovers the library is closing down.

Steve’s flabbergasted as Michelle reveals that Andrea’s married and unable to watch his mate getting messed around he breaks the news to Lloyd that Andrea has been leading a double life. Lloyd’s stunned but when Andrea walks into his flat having left Neil will he be able to forgive and forget as he confronts her about her web of lies?

Deirdre assures Peter he has her support no matter what but Peter’s hurt that his own family think he’s guilty.

When Julie throws Dennis out during a staged row Rita agrees to let him stay the night with her. Has his plan worked?

Elsewhere as Sophie and Maddie babysit Simon it’s clear Maddie has an instant rapport with him. 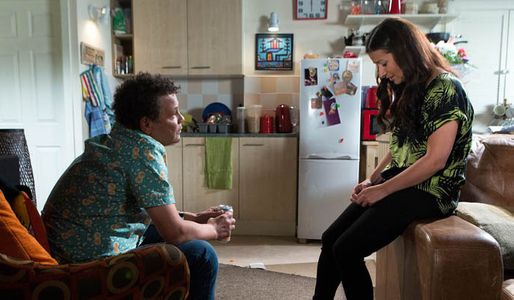