Alya’s intrigued when she witnesses Gary collecting a certificate of health from the medical centre. Cornering him in the café, Gary is forced to explain that he’s signed up for some dangerous security work in the Ukraine in a bid to clear his debts. Alya’s horrified but reluctantly agrees to deliver letters for Gary should anything happen to him. However when she unwittingly drops the letter marked ‘Sarah’, will Sarah get to read the contents before Gary leaves for the airport?

As the police take Gemma in for questioning, Cathy assures Rita that Gemma thinks the world of her and would never steal from her. But Rita reckons Gemma has them both fooled.

Phelan’s chuffed when Nicola calls and asks him if he’ll cast his professional eye over a flat she’s hoping to buy. Nicola tells Phelan how she took his advice and put in a reasonable offer but the developer laughed in her face. Phelan demands the developer’s name.

Having waited for Kate to go to work, Alya emerges from Luke’s bedroom. Alya confides in Rana that she slept with Luke but they didn’t have sex. When Rana finds out that Liz has signed up for some free vape cartridges and provided her bank details, she warns her she’s been scammed.

Phelan meets up with the developer and pointing out he’s in the trade and knows every scam, leans on him to accept Nicola’s offer. Thrilled, Nicola tells Phelan her offer on the flat has been accepted and it’s clearly thanks to him.

Liz is gutted to discover her bank account has been emptied. Liz laments to Eileen how the scam leaflet was pinned to the Medical Centre notice board and she intends to find out who’s behind it. Kate arrives home to find Luke and Alya kissing. Unimpressed, she tears a strip off them for getting together behind her back, claiming she’s going to feel like a spare part in her own home. 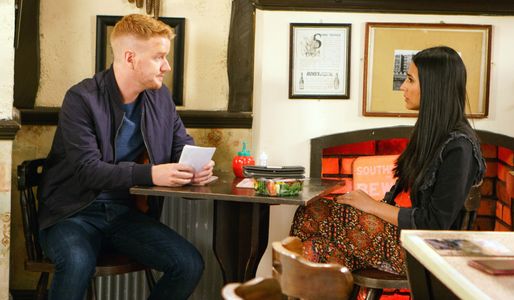 Pascale Day
…
#Coronation Street
From hair ideas to outifts, look no further for your daily inspiration