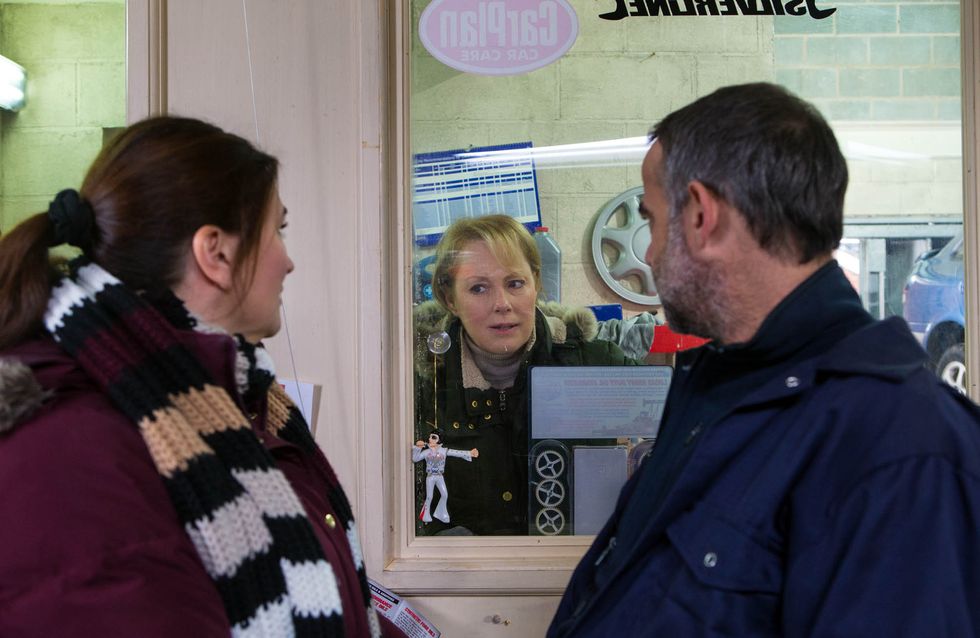 Ken’s pleased when Tracy reveals Robert stayed the night, they’re back together and this time it’s for keeps. As Nick, Leanne, Robert, Andy and Steph prepare for lunchtime, suddenly the bistro is plunged into darkness. It transpires that one of the builders at the arches site has accidentally cut through the mains power cable. Kevin’s grateful as Pat Phelan, one of the labourers on site, offers to sort it out. Meanwhile Jamie and Lee watch the bistro, clearly planning something. Wearing only some sexy lingerie and a coat, Tracy sets off to surprise Robert. But as she arrives at the bistro she listens in horror as Carla implores Robert not to go into business with Nick as Robert tells Carla that their night of passion meant nothing and he only loves Tracy!

Loved up Anna and Kevin agree that it’s time to go public with their relationship. But before they get chance an incensed Sally rushes into the garage to enlist Kevin’s help as a council worker is threatening to remove Craig’s new mural to Maddie. How will Sally react when she arrives to find Kevin and Anna kissing passionately?

When Ken calls in the salon and invites Audrey for a drink after work, flustered Audrey makes excuses and pretends she’s going to the cinema with Gail. Ken’s bemused.

Roy arrives back from visiting Sylvia in Hastings. Clearly worried, Roy explains to Cathy how Sylvia is all on her own having sacked her carers. Jason thanks Kevin for putting in a good word for him as he’s been subcontracted to work on the Arches project.

In the kitchen, Tracy reels as Robert tells Carla he regrets their night together but his future is here whether she likes it or not. Angry Carla reckons she can get Nick to change his mind but dismissive Robert leaves. With Carla alone in the bistro, Tracy eyes the knives, hell bent on revenge. Suddenly Jamie and Lee break into the bistro, intending to rob the till and put the frighteners on Steph. Pinning Carla to the floor they demand cash. Scared witless, Tracy quietly leaves, forgetting her phone in the process. With no sign of Steph and a till devoid of cash, Jamie and Lee grab Carla’s bag and do a runner. Furious, Carla goes after them. As Jamie and Lee jump into their car intent on making their getaway, Carla clings onto her bag and is dragged down the street by the moving vehicle. Pat Phelan positions himself in front of the oncoming car but realising it’s not going to stop, Kevin drags him out of the way, while Robert rushes to Carla’s lifeless body.

Sally’s appalled to realise Kevin and Anna are an item and furious with Tim when she discovers he already knew. Suddenly remembering Sophie, Sally orders them to follow her to the ginnel where Craig and Sophie stand protectively in front of Maddie’s mural. With Sally adamant the mural is staying, the council worker grudgingly admits she can appeal. Sally resolves to fight all the way. Meanwhile Anna’s horrified to see Phelan back on the street, working for Kevin.

Complaining that the annexe is always cold, Gail asks Jason to give her a quote for under floor heating. 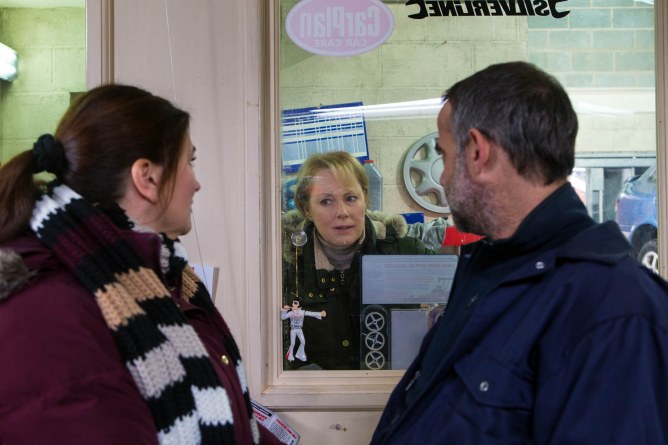