Hayley's good mood after Blackpool is ruined when she finds out Jane's been admitted to a hospice because her cancer has spread.

At the hospice, Roy's shaken up as he sees what awaits Hayley. He senses Hayley's fears when she sees Jane's quick deterioration and how dosed up she is on morphine. He decides to broach the subject of patient choice with regard to pain relief - and is shocked when she makes a decision.

Elsewhere, Eva gives Nick a shock message from Leanne after he's been worrying she'll never forgive him. Meanwhile, Kylie's disgusted Nick kept quiet about what David had done. David pleads his case with Audrey and begs her to speak to Kylie.

Also, Michelle's horrified when she finds out the truth about Barry's marriage - Helen caught him in bed with one of her friends.

Roy can't believe or process that Hayley wants to end her own life when the cancer spreads. He's appalled to realise how much she's thought about her decision.

Hayley tells him she wants to be in control instead of spending her last days in a drug-induced haze - but Roy's having none of it.

She tries her best to convince Roy of her plan - but can the couple deal with this bombshell? 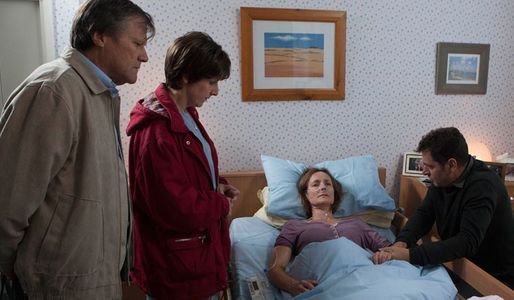