Anna tells Michael about the message on Phelan’s phone confirming the scam and the pair come up with a plan. Michael breaks into the building site but he’s taken aback when a delivery man calls with a consignment of tiles. Meanwhile, Anna attempts to keep Phelan away from the site by summoning him to her flat and offering him £2k to leave Weatherfield. Telling Anna to stick her paltry offer Phelan turns to go but as he does he hears his mobile ringing. Anna makes out that Faye found it in the cafe but she’s forced to hand it over. Phelan takes the call and discovers that a man fitting Michael’s description has taken delivery of tiles at the site. Grim faced Phelan sets off whilst Anna tries to warn Michael. As Michael rifles through Phelan’s papers in the site office, he’s thrilled to come across the fake passport and ticket to Mexico but his delight is short lived as he looks up to see Phelan approaching menacingly.

Daniel shows Tracy and Adam the rota he’s drawn up for Ken’s care but Adam’s unimpressed. Elsewhere Brian visits the bistro and introducing himself as the Environmental Health Officer, explains he’s had a complaint from a customer. After devouring a free meal, Brian assures Robert he’ll be taking no further action but Robert’s furious. Who reported him?

When Brian arrives in the café, Roy’s thrilled to see his old friend. Brian tells Roy about his break up from Julie, his change of career to Environmental Health Officer and how he’s about embark on yet another new job at the council as their Recycling Czar. Roy introduces Brian to Cathy but when Cathy talks excitedly about their forthcoming wedding, how will Roy cover his discomfort?

Putting on a brave face, Gemma clears out her stuff from the kebab shop. Rita enters the Rovers to find Gemma upset with all her worldly possessions by her side, will Rita work out Gemma’s secret?

Clutching the fake passport and ticket, Michael tells Phelan the game’s up. As Phelan approaches Michael menacingly it’s clear he’s dicing with death. Sensing he’s in danger Michael hurls a chair at Phelan, knocking him to the ground. Seizing the opportunity to escape, Michael makes a run for it. Will he escape with the evidence to bring Phelan down or has Phelan got one last throw of the dice? Meanwhile at the Platts an agitated Anna arrives demanding a quiet word with Gary, explaining that Michael is in danger as Phelan followed him to the building site. Gary sets off to rescue Michael as Gail anxiously tries his mobile again.

Peter, Tracy, Daniel and Adam help a frail Ken into No.1. When Tracy suggests a night on the town, Luke’s pleased. However as they’re about to set off Tracy spots a dodgy looking bloke peering through the window of No.1 and cancels their date. When she later finds the same bloke rooting through their bin in the ginnel she goes to confront him but he legs it. Tracy describes the two incidents to Peter who is clearly unsettled.

In an effort to appear keen, Roy sets about making wedding plans with Cathy but it’s clear he’s out of his depth. When Cathy enlists the help of Michelle, Roy’s put out.

​​​​​​Taking charge, Rita tells Gemma she can move in with her. When Rita reveals she’s bought her a new dress and shoes for the awards ceremony, Gemma’s overcome by her kindness. 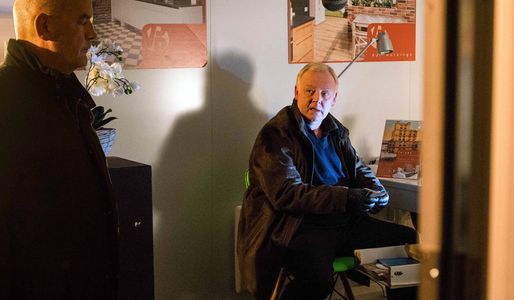