David busies himself with Max and Lily, determined to stay strong for them. Gail and Audrey watch, concerned. Gail assures Michael that her feelings haven’t changed but suggests they put their relationship on hold for the time being as she needs to concentrate on David and the kids. Michael’s understanding. Leanne offers a sympathetic ear to Nick. The rest of the residents are left reeling as news of Kylie’s untimely death travels around the street.

Leanne meets up with Steph for a drink in the bistro but she’s suddenly overcome by a wave of nausea. Steph guesses she’s pregnant.

Caz approaches Kate, hoping to talk but Kate gives her the cold shoulder. Maria’s sympathetic and assures Caz that she’ll come round given time. When Maria invites Caz to move in with her while she tries to build bridges with Kate, Caz is touched and accepts.

With the factory short-staffed, Jenny suggests Johnny gives her a trial as a machinist. Sally’s sceptical about her sewing skills but Jenny sets about proving her wrong.

The David Platt of old rears his head as David is determined to point the finger of blame at someone for Kylie’s death. Like a man possessed he turns into a one man vigilante. Leanne pours her heart out to Steph and admits she’s pregnant but refuses to reveal who the father is. Steph promises not to breathe a word.

Kate confides in Sophie how stupid she feels for believing Caz’s lies. Sophie’s sympathetic and agrees to meet her for a drink after work. Luke is putout to find Caz has moved into the flat. Maria’s irritated by his attitude and assures Caz she’s welcome for as long as she likes. As Kate and Sophie head to the pub arm in arm, Caz watches from a distance, consumed with jealousy.

The factory girls gather round Jenny’s machine and cheer her on but Jenny’s disappointed when the material snags and realises she’s failed the test. Johnny assures Jenny that he was impressed with her first attempt and she mustn’t give up. Jenny’s cheered by his words.​​​​​
​ 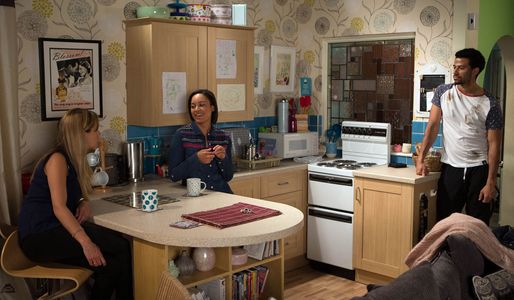