When Sharif arrives back from hospital, Alya is left overcome with emotion after such a close call. Clearly upset, Alya calls in the Rovers and orders a white wine. Gary is left stunned and reminds her it is Ramadan. Storming out of the pub Alya sees Jason approaching No.11 with some beers and asks if she can join him. As they get drunk together Alya makes a move on Jason, will he respond?

Luke breaks the news to Tyrone, Kirk and Chesney that the t-shirts are fake. Fuming they decide to get their own back on Luke’s mate and break into his lock-up and steal a load of fake clothes. When Luke’s mate arrives they make a hasty exit but Chesney accidently gets left behind. Will Chesney be caught in the act?

David visits the hospital to hand over a card to Michael from Gail, but is left annoyed when he see’s Kylie there.

As Kevin and Tim’s friendship blossoms, Tim is put out by Sally’s excuse for not attending Miley’s christening. Lloyd arrives back from a month at sea. Leanne and Simon return from France with news about Eva’s love life that leaves Jason gutted.

Alya flees from No.11 disgusted with herself, leaving Jason confused. How far did their night of passion go? When Gary then arrives at the Nazirs, pleading with Alya to let him be there for her, before getting down on one knee and proposing, she’s overcome with guilt and tells Gary she doesn’t deserve him. Unaware of what happened the night before, a devastated Gary confides in Jason, who does his best to comfort him before calling Alya and urging her to give Gary another chance. Will Alya accept Gary’s proposal or is her guilt too much to bear?

Having realised someone is in the lock-up the lads search for Chesney. Failing to find him, and unaware the break-in has anything to do with Luke, they head to No.9 to deliver the t-shirts. But when Chesney arrives back at the house at the same time, the lads instantly recognize him and Luke realises the game is up. As they all square up to each other, Fiz suddenly returns. Will she realise what’s going on and be able to calm the storm?

Michael is touched when he wakes to see Eileen, David and Kylie at his bedside, after his successful operation. Leaving the hospital Kylie begs David to give her another chance, but is it too little too late for David?

Liz is dressed up to the nines as she heads out on another date with Dan. 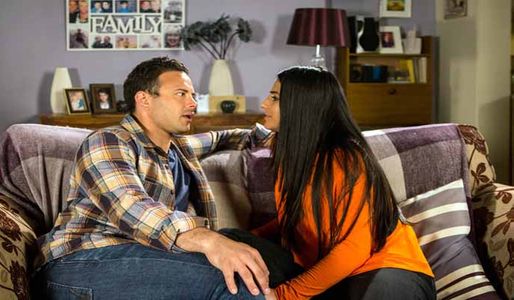