Paul spends his birthday in court and is punished with community service. To try and cheer him up Eileen organises a lads' night and invites Steve, Lloyd and Brian.

But Paul's workmates don't show and he immediately blames Lloyd for branding him a racist. The evening is a big fail so Paul, Steve and Brian head home, leaving Lloyd to chat up the barmaid. But then a group of locals approach and start making racist digs.

Elsewhere, Craig tries to get hold of Karl, desperate to talk to someone. But before Karl can get to him, Stella finds him drinking vodka. She takes him home to Beth, with a panic-stricken Karl in hot pursuit.

Also, Leanne accuses Gail, Kylie and David of gossiping after walking in on them talking about how she's coping.

As the racist thugs push Lloyd against the wall, Paul suddenly arrives and jumps to his defence. The thugs back off and Lloyd thanks him. Paul apologises to Lloyd and the boys bury the hatchet - but there's still a rift between him and Eileen.

Elsewhere, the consultant tells Gail and Leanne that they're reducing Nick's sedation and he should wake up soon. But how will David react?

Also, Stella tells Beth she found Craig drinking. Karl makes a joke of it but Craig's feeling so miserable he contemplates coming clean to Beth. 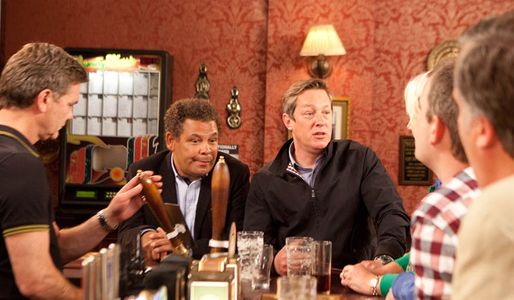 Coronation Street 12/07 - Lloyd accuses Paul of being a racist