In the corner shop, Sarah bumps into Lee and tells him that she’s desperate to see Billy. Claiming that Billy is on his way round, Lee lures Sarah back to his bedsit.Whilst Sarah waits anxiously for Billy, Lee steals Sarah’s phone from her bag and calls Billy. Lee informs Billy he’s holding Sarah hostage and will release her in return for £1k. Billy’s horrified. Having explained Sarah’s predicament, Billy recruits Todd and David to check out some addresses in search of Lee while he tries to raise the cash. As jittery Sarah waits for Billy, Lee fuels her fears by insisting that Callum’s still alive. Sarah’s terrified, her worst nightmare apparently confirmed. Sarah attempts to make a run for it but Lee grabs her and they wrestle on the floor. Reminded of her ordeal at the hands of Callum, Sarah breaks down and Lee realises she’s mentally unstable. Arriving at Lee’s bedsit and hearing Sarah’s cries, David breaks down the door. What will they find?

Alex secretly borrows Roy’s car keys and offers to drive Gemma to the cemetery to visit Callum’s grave. Alex sneaks the car keys back to their rightful place,unnoticed by Roy and Cathy but later Roy’s puzzled to find the Woody parked at a peculiar angle.

Caz presents Maria with a rare kids’ book for Liam. Maria’s touched whilst Kate is slightly bemused by her generosity. As Luke works on a car, he overhears Cazon the phone giving someone a hard time and demanding they change their story. Luke’s intrigued.When Luke voices his suspicions about Caz, Maria’s dismissive.

Happily reconciled, Sean and Billy plan their day while Todd masks his jealousy. Kirk accompanies Beth to her school reunion. Beth trades insults with her old nemesis Lindsey, inventing a lavish lifestyle. But confronted by Lindsey, Beth admits that Kirk’s a lowly factory packer of limited intelligence. How will Kirk react when he overhears her comments? Bragging to Yasmeen that she has some important friends from the council coming round for evening drinks now her summerhouse is fixed, Sally heads out shopping. Cunning Yasmeen suggests to Tim he should throw a garden party for his mates and serve up his highly acclaimed home brew. Kevin, Dev, Freddie andKen join Tim in the garden at No.8 for an impromptu beer party. Sally returns home with fellow councillors Paul and Helena in tow. How will they react to find Tim and his mates getting drunk in the garden?​​​ 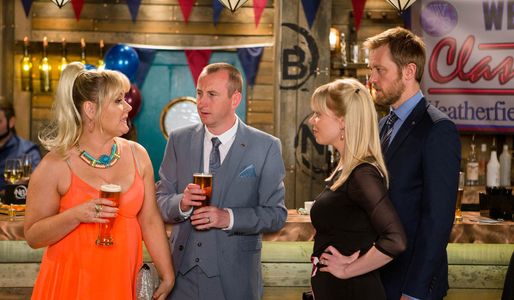