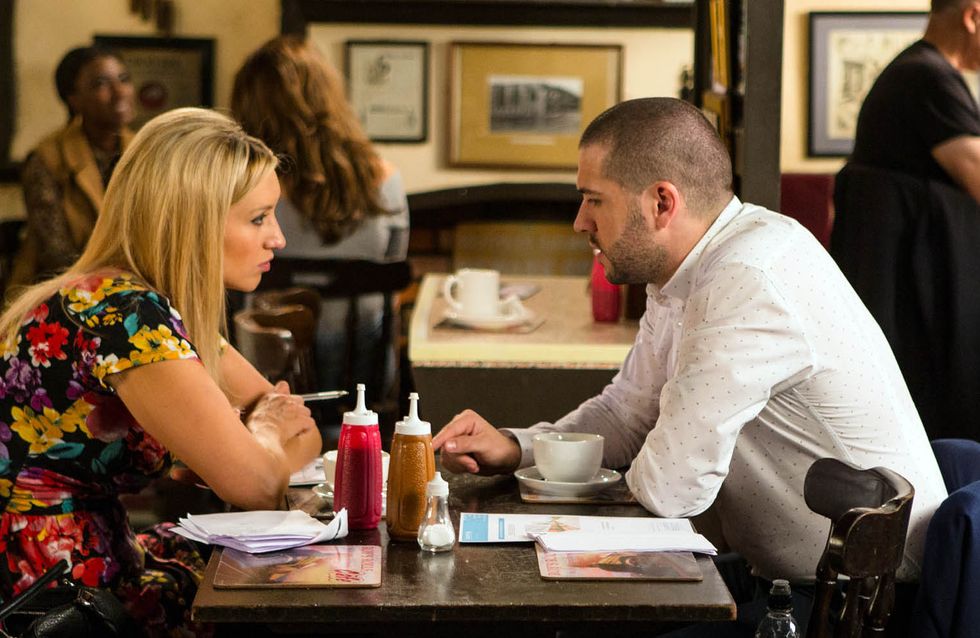 Reminding Steve that she’s at her most fertile, Michelle suggests they meet for an afternoon lie down. Liz is disapproving and tells Steve it’s time he told Michelle the truth, that he doesn’t want another baby. Seizing the opportunity to escape, Steve grabs an airport run and heads off. Put out to discover Steve’s done a runner, Michelle confides in Maria and Kate that she and Steve are supposed to be trying for a baby. At Kate’s suggestion, Michelle downloads anew pregnancy app and is shocked to realise she’s five days late. Having returned from his airport run, Steve plucks up the courage to face Michelle and tell her the truth. Maria calls in the corner shop to buy a pregnancy testing kit for Michelle. Aidan clocks her purchase with alarm, worried thatMaria may be pregnant. Maria and Kate wait on tenterhooks while Michelle does her pregnancy test.

Her mind made up, Leanne spells out to Liz that neither she nor Steve will have anything to do with her baby. Liz is saddened. Leanne breaks the news to Simon that they’re going to live with Toyah in Liverpool. Simon’s horrified and confronts Nick, hoping he can shed some light on Leanne’s sudden decision to up sticks and move away. Nick is stunned at the news and asLeanne approaches their table, she realises she has some explaining to do.

As Eva enthusiastically shows Aidan some house brochures, it’s clear his heart isn’t it and when Mary regales them with tales of her motorhome, he’s only too glad of the distraction.

Izzy tells Gary that she doesn’t want a pretend relationship and that it would probably be best all round if he moved out. Gary’s taken aback. Alya orders Zeedan to get his thinking cap on as it’s their grandparents 45th wedding anniversary and they need to plan something special.

Steve finally admits to Michelle he doesn’t want a baby. Utterly devastated, Michelle reveals she’s pregnant. She confides in Liz that she wishes Steve had been honest from the outset as now it’s too late and she’s carrying his baby. Liz is stunned. Michelle finds Steve buried deep in thought in the back yard. Telling her how sorry he is for upsetting her, will Steve come clean about his fling with Leanne?

Begging Simon to go along with her story, Leanne tells Nick that she’s only going to Liverpool for a week or two as Toyah needs a shoulder to cry on.Nick’s supportive and offers to look after Simon while she’s away. Leanne’s consumed with guilt.Putting the ball firmly in his court, Leanne tells Simon he can either move to Liverpool with her or stay in Weatherfield with Nick. Simon’s torn. Still reeling from the news, Liz tells Leanne aboutMichelle’s pregnancy.

When Eva tries to interest Aidan in more property details, he flips and telling her to give it a rest, storms out. Eva’s hurt. Aidan corners Maria and quizzes her about the pregnancy testing kit. Maria assures him it was for a mate as Aidan breathes a sigh of relief. Aidan calls at Eva’s flat and handing her gifts, apologises for his earlier outburst. Will Eva thaw? Leanne breaks the news to Eva that she’s moving to Liverpool. Eva excitedly suggests to Aidan that he should move into the flat. Will Aidan agree?

When Zeedan reveals Rana’s plan of a sapphire anniversary party with a blue theme, Alya reluctantly admits it’s a great idea. When Alya suggests Rana should invite her parents to the anniversary party, Rana’s not keen. Will Izzy agree to Gary’s suggestion that they should continue to live together as friends and provide Jake with a loving home.​​​​​​​