Frustrated Todd tells Billy about Phelan’s scam and how the police won’t take him seriously after he wrongly reported Eileen missing. Todd squares up to Phelan and vows to find proof of the building scam to give to the police. Phelan’s unnerved andphones Vinny to warn him. When Phelan calls Todd to invite him for a chat at the development site,Todd’s pleased, thinking Phelan’s on the back foot. At the Calcutta Street site, Phelan spots the contents of Vinny’s holdall and is alarmed to realise the lengths to which Vinny’s prepared to go to silence Todd! Meanwhile when Todd leaves his phone in the Rovers, Sean answers a call and is shocked to learn the caller’s identity. Troubled Sean reveals to Billy that he took a call on Todd’s mobile from the Bishop. Billy’s stunned by the obvious implications.

Alex approaches Phelan about buying one of his flats.Unscrupulous Phelan demands a £15,000 reservation fee and suggests Alex asks Roy for a loan as they are selling fast. But Roy refuses to invest in something that hasn’t been built. Back from the spa,Eileen hears Anna warning Cathy and Alex against buying a flat from Phelan. Eileen steps in to assure them it’s a sound deal and agrees to hold a flat for Alex when Cathy pledges to raise the funds.

As Sharif takes Yasmeen out for a romantic lunch, Sonia looks on jealously. In front of Sharif, Sonia cries on Yasmeen’s shoulder over her failed marriage. Sharif’s awkward as Yasmeen comforts her. Alone at No.6, Sonia suggests to Sharif they make the most of the empty house. Will Sharif be able to resist temptation?

Audrey calls at the garage and tears a strip off Freddie for abandoning her at dinner.Freddie describes his encounter with Sadie’s friend to Kevin and Luke. They urge him to explain to Audrey. Beth begs Kirk to come home, is he ready to forgive?

As the truth sinks in that Todd tipped off the Bishop, Billy’s gutted and confronts Todd. Realising the game’s up, Todd claims he merely set Billy free from a religion that wouldn’t accept the real him. Billy’s furious and finishes with Todd. Meanwhile Phelan’s shocked when Vinny reveals he’s in huge debt to some very shady characters and won’t allow anything to jeopardise the development. Vinny and Phelan are gobsmacked when Todd turns up at the site and announces that he wants in on the deal, declaring he’s reverting to type following Billy’s rejection and back on the dark side he’ll happily fleece the neighbours. But he stipulates that Eileen and Jason mustn’t lose a penny or he will scupper the project. Will Phelan and Vinny accepts Todd’s terms?

Yasmeen drives Cathy to Alex’s dad Nigel’s house. But when Cathy knocks on the door, a hostile Nigel refuses to discuss Alex and slams it in her face.

Sharif’s guilt-ridden after sleeping with Sonia and when she starts criticising Yasmeen’s taste, Sharif forbids her from mocking his wife. Sonia’s chastened but as Sharif places a hand on her back, Alya walks in and clocks their intimacy. Meanwhile Aidan finds some drawings in a filing cabinet at Underworld and is impressed by Alya and Sinead’s old sideline designs.

Freddie calls into the salon with flowers for Audrey. He explains how Sadie’s friend made him feel guilty about their date and he panicked. Seeing Freddie’s turmoil, Audrey melts. Audrey tells Freddie they should just be friends since he’s still grieving. Freddie agrees, saddened.​​​​​​ 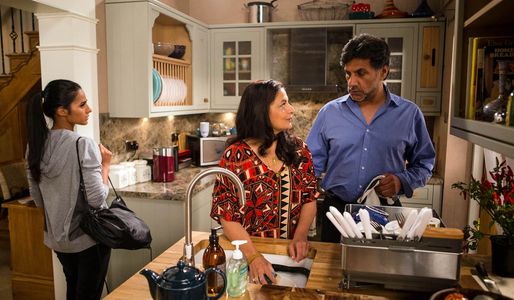