Eva confides in Todd that she’s secretly meeting Tony for a house auction at a hotel in town. Whilst Eva’s not looking, Todd steals her mobile phone and plants it on the hotel reception desk, making out that a guest left it in the bar. When Eva’s late for dinner Jason phones her mobile and is horrified to discover it’s been handed in at a hotel. Fearing the worst, Jason sets off for the hotel whilst Todd’s delighted to see his plan coming together. Having bought a house at the auction for a bargain price, Tony and Eva celebrate with a glass of fizz in the hotel bar. Arriving will Jason rise to Todd’s bait?

As Gail prepares for Michael’s welcome-home-party, she hopes she hasn’t made things worse for David by wading in and antagonising Callum. When there’s a knock at the door, David horrified to see Callum. Shoving David out of the way, Callum forces his way in.

Sally, Tyrone and Maddie gently rib Kevin over his failed date. But as Kevin locks up the garage, Jenny approaches and telling him she’s changed her mind, suggests they go for a drink. Kevin’s thrilled.

Linda invites Izzy and Katy to join her for dinner in the bistro. Katy’s keen whilst Izzy only accepts her offer to hurt Owen. Meanwhile Anna remains at loggerheads with Owen and makes it clear she’s jealous of the love he once felt for Linda. In the hospital, Chesney and Kirk watch with baited breath as the physio helps Sinead to sit up for the first time.

In a rage, Jason marches up to a stunned Tony and accusing him of having an affair with Eva, punches him. Back on the street Jason tells Eileen, Todd, Sean and Billy how he caught Tony and Eva together in a hotel. Todd’s quietly thrilled. Tony and Eva barge into No.11 and explain to Jason that they were simply attending an auction at which Tony kindly bought them a house. Deeply offended that he could think they were having an affair, Eva tells Jason they’re finished. Jason’s devastated whilst Todd revels in their distress. Jason apologises to Eva and getting down on one knee, asks her to marry him. How will Eva respond?

Thrusting a letter at David, Callum demands to see Max. Gail and Audrey threaten to call the police but Callum’s unfazed. While Callum fawns over Max, David opens the letter. He’s gutted to read that Callum’s applied for a residency order for Max. To David’s horror, Callum tells Max that he is his real Dad. Max looks confused and David orders Callum to leave before attempting to explain all to an emotional Max.

After an enjoyable meal, Kevin persuades Jenny to join him for a drink in the Rovers. Sally’s taken aback to see that Kevin’s date is Jenny Bradley, while Norris tears into Jenny, berating her for the way she treated Rita in the past. Jenny leaves embarrassed, followed by an apologetic Kevin. Can Kevin comfort Jenny with a kiss?

Linda persuades Owen that they should forgive and forget for the sake of the girls. Will Owen agree? After another pep talk from her physio, Sinead paints on a smile for Chesney, Kirk, Beth and Julie when they visit. 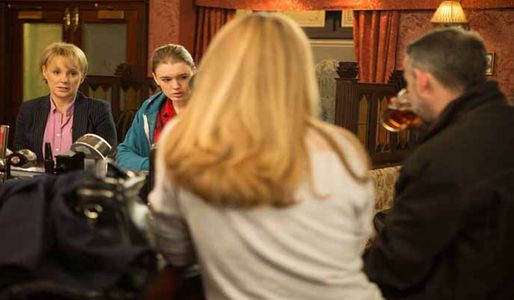