When Gail spots Gavin’s obituary in the paper, she quickly throws it in the bin, leaving Michael oblivious. At the bistro Gail shows Andy the obituary. Telling Steph he can’t handle the stress, Andy walks out leaving Steph to cope on her own. As he heads to the pub he’s approached by Bethany, who’s just arrived from Milan. Bethany cheekily persuades him to buy her a drink in the Rovers. Intrigued, Andy agrees. Meanwhile Michael’s Aunty Barbara calls at No.8 to break the news of Gavin’s death. Gail lies, making out Michael is in hospital and won’t be able to attend the funeral. When Barbara reveals that Gavin actually died of a heart attack, Gail’s shocked. Desperate to get Barbara out of the house, Gail hustles her out but she freezes as she sees Michael approaching.

As Anna, Owen and Izzy bid farewell to Katy, a tearful Chesney clings to Joseph. Will he be able to let Katy leave for Portugal with his son?

Andrea calls in the cab office and parks herself on Steve and Lloyd’s favourite chair. She’s horrified when the chair collapses and nervously shows Lloyd the broken chair.

When Kevin’s childminder lets him down reluctantly agrees to look after Jack for the day. Sophie tears a strip off Kevin for leaving Jack with Jenny but to Kevin’s surprise, Rita defends him, telling Sophie it’s up to Kevin who he spends time with.

Gail sprints across the road and heads Michael off, insisting he goes for a drink with Steph and promising to join him shortly. Back at the house Gail ushers Barbara out, promising that as Michael is too ill, she will attend Gavin’s funeral in his place. As Barbara leaves Gail breathes a sigh of relief but in the Rovers she’s stunned to find Steph and Andy at odds as he’s been entertaining Bethany. Pointing out that Bethany is only 14 and shouldn’t be drinking, Gail drags her home. Bethany explains how Sarah’s too busy with work to care about her so she thought she’d visit her Gran. Gail’s touched until she speaks to Sarah and gets a very different story. What is Bethany’s game? Meanwhile when David reminds Gail that his next mediation session with Callum is on Monday, Gail quietly despairs, realising it’ll clash with Gavin’s funeral. Gail tells a horrified Andy how Gavin died of a heart attack.

On her way to the airport, Katy calls at the hospital to see Sinead. As she hugs Joseph will Sinead and Chesney be able to say goodbye to Joseph?

Steve and Lloyd set about rebuilding the cab office chair. Andrea’s pleased to see them getting on so well again.

When Roy’s allotment application is turned down, Sharif offers to share his plot with Roy. Jenny cooks a meal for Kevin, Sophie, Maddie and Jack. But when Kevin is called away on a breakdown and Jack picks up a shallot from his plate, Jenny goes berserk, worried he’ll choke on it. Sophie and Maddie are taken aback as an agitated Jenny leaves. Kevin returns home and Sophie tells him about Jenny’s weird behaviour. 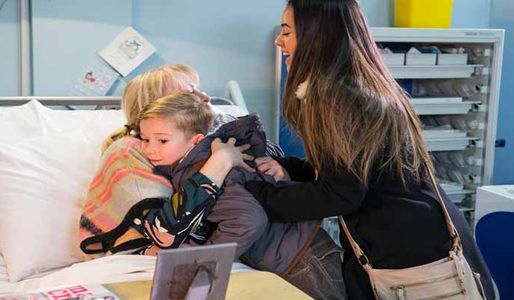