In the bistro Robert admits he overheard Daniel’s conversation with his lecturer and congratulates him on his place at Oxford. When Robert then mentions it to Ken, Ken’s surprised although clearly overjoyed, and sets about organising a family meal to celebrate. Meanwhile Sinead takes Daniel to view a flat that’s up for rent, painting a cosy picture of life with the baby. Daniel tries to push thoughts of Oxford from his mind but when they arrive at the bistro Sinead’s stunned as a proud Ken announces he’s called them all together to celebrate Daniel’s acceptance to Oxford!

Toyah’s perturbed to find a stash of cash in the kitchen cupboard but keeps her counsel. Meanwhile when Peter tells her that he’s worried about one of his regular fares as their ex keeps bothering them, Toyah encourages Peter to going and check on them, presuming it to be a man. Peter calls at Chloe’s house and fixes some bolts to the doors, Chloe’s grateful, her fondness for Peter evident.

Seb is put out when Faye doesn’t seem to have time to see him. Consumed with jealousy Seb lets his temper get the better of him. Nick begs Michelle not to tell Leanne about their fumble but bitter Michelle’s adamant Leanne deserves the truth. Will she drop the bombshell?

Sinead rushes out of the bistro, deeply hurt. Telling a devastated Ken that he’s turning Oxford down, Daniel goes after her. Daniel assures Sinead he has no intention of going to Oxford and wants to spend the rest of his life with her. Ken later calls Sinead to no.1 where he implores her to call off her relationship with Daniel as she’s standing in the way of his career. Hurt, Sinead reveals she’s pregnant with Daniel’s baby, Ken reels. As Ken rants at Sinead about his wasted life with Deirdre and how he wants better for Daniel, Tracy overhears and is appalled. How will Sinead react to Ken’s pleas?

Sensing Seb’s jealousy, Faye hugs him and assures him she loves him. Having seen another side to Seb, Anna bans Faye from seeing him. As Peter makes to leave, Chloe tries to kiss him. Will Peter respond? Back at home Toyah confronts Peter with the cash, will he explain all? Nick and Leanne call at the Rovers and begrudgingly agree access arrangements with Steve. ​​​​ 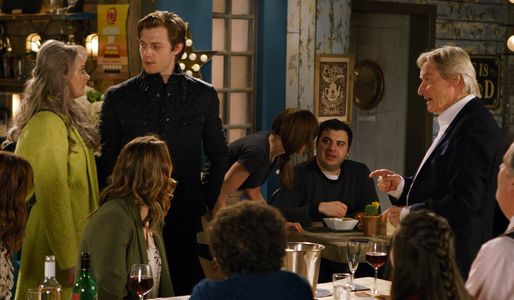 Pascale Day
…
#Coronation Street
For all the best videos, memes and shareable news!