Roy's birthday is tinged with sadness as he and Hayley realise it will be their last one together. But Hayley refuses to get upset and puts on a brave face, also putting aside the fact Christian's ignored her message, throwing herself into planning Roy's party in the pub. But as reality sets in, will Hayley confide in Roy?

Elsewhere, Stella tries to get rid of any reminders of Karl as her family tell her she mustn't blame herself.

Meanwhile, Sean starts to wonder if Eva fancies Jason as she thanks him for his support and tells him what a great guy he is.

Also, Fiz is happy to move in with Tyrone but she's upset about Hayley.

Hayley's determined not to be defined by her illness and Roy vows to be strong for her. At Roy's party, the karaoke is underway at Hayley's request and she vows she's going nowhere until she's taught Roy to drive, done ballroom dancing and spent more time with Hope and Ruby. But how disappointed is she about Christian's lack of contact?

Elsewhere, Jason wants to escape the karaoke and so invites Eva to join him at his house for a drink. As the drinks flow, Jason leans in for a kiss with his mum's ex.

Also, Chesney and Sinead spend their first night alone at no.5 and are excited about what the future holds. 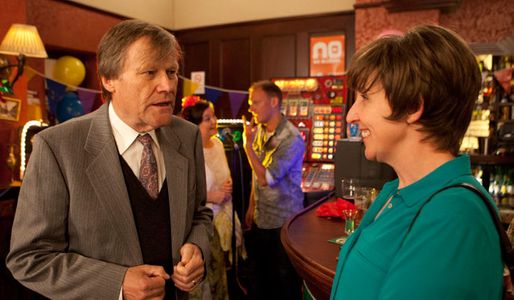