In his prison cell, a nervous Peter waits for the jury to reach a verdict. Jim winds him up telling him he may as well accept he’ll be behind bars for life. Peter’s solicitor arrives to reveal that the jury have reached a verdict and he’s required back in court. Peter anxiously awaits the verdict.

Roy’s clearly not himself since the break-in and is unnerved to spot a couple of teenage louts hanging around again. He locks himself into the café.

Tony and Liz continue their hostilities, neither willing to back down. Meanwhile Liz visits Jim in prison and tells him she doesn’t intend to visit again. But she’s stunned when Jim announces that he’ll be able to visit her in future as he’s being moved to an open prison.

Elsewhere Promising David she’ll clean the house and prepare a meal for Gail and Michael’s return, Kylie secretly takes another wrap of speed. Owen breaks the news to Anna that they’ve received the repossession order and have to be out of the house in 28 days. Anna’s worried sick.

Peter’s stunned as the verdict is revealed, while Rob does his best to hide his feelings. Is Peter going down for a murder he didn’t commit or will the search for the real killer commence? Carla is now convinced of Peter’s innocence and tells Rob she wonders who really killed Tina.

Jim admits to Liz that he hopes once he’s released, they can get back together. Horrified at the thought, Liz tells him it’s never going to happen. How will Jim react? And how will Steve react when Liz explains that Jim was never bothered about seeing him again, it was just a ruse to try and win her back.

Roy joins Fiz, Sinead and Beth in the pub. Sinead realises he’s avoiding being home alone and is clearly still nervous as a result of the burglary.

Elsewhere Gail and Michael return from their holiday and are impressed to find Kylie’s tidied the house and made a meal. Kylie covers her unease but when she reaches for another wrap of speed will she be caught in the act? When Faye finds some estate agent details, Anna and Owen are forced to admit they’re moving and it might mean a change of school. 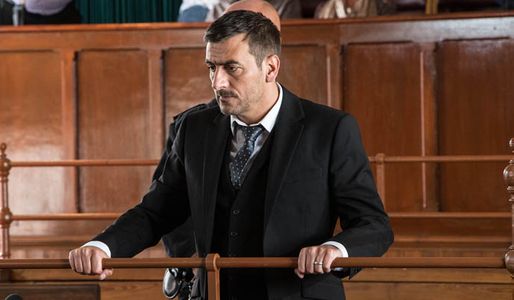