Steve hears Carla tells Michelle she’ll terminate the baby if Peter keeps drinking because she can’t raise the baby alone. Simon tries to get hold of Peter when gets upset when Carla tells him Peter’s not allowed to speak to anyone. Simon’s upset and rushes to find Tina. Carla is grateful for calming him down, but Steve’s sickened by Tina’s barefaced lying. Can he bear to keep Peter’s secret for much longer?

Maria sends Tyrone another text whilst pretending to Kirsty. Fiz calls the number and David answers Maria’s mobile. Before he can say anything, Fiz yells down the phone that Kirsty’s a twisted cow. Has Maria been caught out?

Rob and Tracy take a load of knock-off electrical goods from Tony.

Steve’s unable to take Tina’s lies any longer and confronts her, telling her he knows about the affair with Peter. Tina’s stunned, but will he tell everyone about her and Peter?

Shocked that Maria has been terrorising Fix and Tyrone, David tells Maria about the call and wants to know why she’s been pretending to be Kirsty. She intends to come clean to Tyrone, but will she be able to tell him the truth, or will she chicken out?

Kal shows Leanne around the gym and Sharif notices the chemistry between them. He’s not best pleased when Eva fills him in on Leanne’s dodgy past.
​
Elsewhere, Michelle touched when Steve gives her a burnt birthday cake, and Deirdre starts coming round to Tony’s charms and accepts a hair dryer from Tracy. 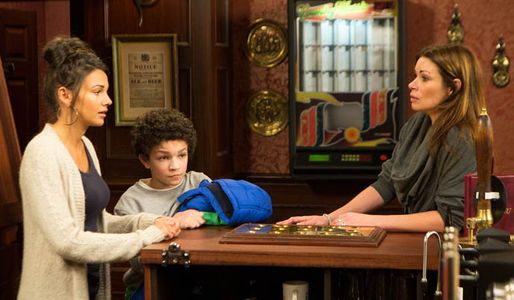