Eileen is beside herself when the doctors tell her that Jason might never walk or talk again and that the next 24 hours are critical. When the police question Todd about Jason’s assault, he is deeply hurt when he realises none of his family bothered to contact him with the news. Knowing he has to visit, Todd turns up at the hospital but as he approaches he overhears Eileen telling Tony how Jason has always been the better son.

Nick’s full of love for Carla after spending the night with her but she reminds him that she’s still moving to LA and that he’s still with Erica. But when Erica tells Nick she knows who really has his heart, will she be able to let him go or can they still make a go of it? And when Carla’s old friend Aidan tips up in Weatherfield wanting to invest in the factory, how will Carla react when she finds out Nick was the one who prompted him?

Caitlin is impressed when Craig tells her that he got an ‘A’ in his GCSE Art exam and she begins to do a sketch of him. When Beth comes out in a rash and Hope still not herself, Dougie suggests they head to the nearest hospital. Beth is relieved to hear that the rash is just an allergy, but Fiz and Tyrone are worried when the nurse insists that Hope needs to see a doctor right away.

Kylie and David are perplexed when they find all of the toys that Callum bought for Max in the bin, but when they try to ask Max about it he clams up and refuses to speak. Later when Callum approaches them on the Street, Max freaks out and begs his mum to keep Callum away. How will Callum react, and will Kylie work out what’s happened?

Carla pours her heart out to Roy and Roy makes her see that her problems will follow her wherever she runs to and that she needs to face up to them. Knowing he’s right, Carla announces to Nick, Aidan, Sally and Alya that she’s staying put in Weatherfield and will no longer be selling. But when Aidan tells Carla he reckons him and her can still do a deal, will she agree to go into business with him?

David plays with Max in the garden and tries to coax him into telling him why he’s suddenly so scared of Callum but Max refuses to talk about it. But when Max later asks Kylie if Jason is going to die, he breaks down and tells her that he saw Callum kicking Jason in the ginnel. Is this the evidence Kylie and David need to finally rumble Callum?

The mood in camp is deflated when Fiz and Tyrone return from the hospital and tell Beth, Kirk and Sinead that Hope is suffering from anaemia. When Craig tells Caitlin she should follow her dreams during a heart a heart, Caitlin kisses him and Craig is on cloud nine. But when Dougie finds them snogging under a tree how will he react, and will Craig’s family have the same reaction?

Tony feels he’s to blame for failing to protect Jason and tells Sarah that he wants the lowlife who put Jason in hospital dead. Will Sarah tell him what she knows? 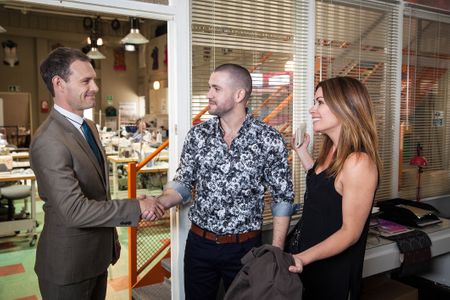